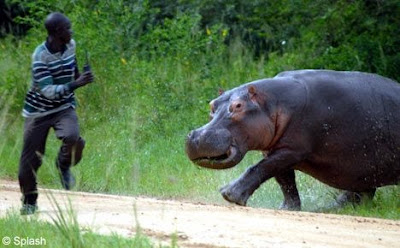 NANAIMO, B.C. — Police say a man who exposed himself to two female joggers in a Vancouver Island park may "think twice" before doing it again after the women chased him with sticks and stones while calling him a coward.

Ann Holroyd and her year daughter Leann, 19, were jogging in a Nanaimo park on Saturday when they saw a man, about 30 years old, with his pants down around his ankles. He was dancing from side to side with face partially covered with a tuque pulled down over his eyes, Nanaimo RCMP Const. Gary O'Brien said in a news release.

"The two initially turned to leave but decided against it and made a decision to not let this incident ruin their afternoon," said O'Brien. "The two picked up sticks and stones and charged at the male yelling 'Coward, coward.' The male quickly decided he had enough and hastily pulled up his pants and ran out of the park."

Hard to find pics to go with this story so I improvised. 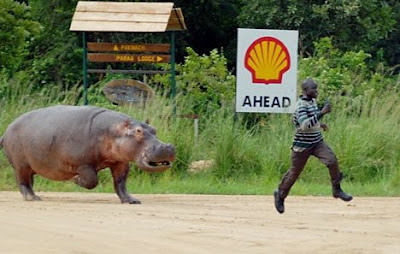 The hippopotamus is recognizable by its barrel-shaped torso, enormous mouth and teeth, nearly-hairless body, stubby legs and tremendous size. It is the third-largest land mammal by weight (between 1½ and 3½ tons), behind the white rhinoceros (1½ to 4 tons) and elephants (3 to 7 tons). Despite its stocky shape and short legs, it can easily outrun a human. Hippos have been clocked at 18 mph (29 km/h) over short distances. The hippopotamus is one of the most aggressive creatures in the world and is often regarded as the most ferocious animal in Africa.

Could be why there are no pokey white dudes indigenous to sub-Saharan Africa!
Posted by CaptiousNut at 6:36 PM