Whistling Past The REO Graveyard 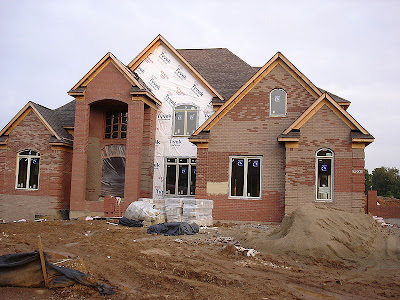 To those of us paying attention, it's well-known that banks are simply *not-foreclosing* on deadbeats (like my landlord).

Here's a typical anecdote, from a Zerohedge comment thread:

I'm in SoCal......ground zero for this mess. But my sister-in-law lives in Arizona. I saw her at Thanksgiving.

She's sitting in a home bought for $1.6 M in 2006. She has not made a payment in 15 months ( option ARM of course ) !! And she still lives in the home. Two short sale offers are in for $ 500k and $550k, which I doubt the bank will accept. Meanwhile, the County ( Pinal ) has raised her taxes from $ 2500 to $ 13,000 because the County's going broke. She doesn't plan to pay that either, along with other troubled prop owners who are boycotting the prop tax in an act of defiance. Letting the banks and the county fight over the carcass, so to speak.

Banks are moving the lower-end stuff and hunkering down with the big stuff. I see it in Cali, too. If the bankstas are going to be whacked with a big number, they get quiet.

Reed said she completed four short sales in the past four months and the banks agreed to as much as $400,000 in losses.

Lenders have been reluctant to do such sales because they didn’t have procedures for employees to approve a financial loss for the company, said Alan White, assistant professor at Valparaiso University School of Law in Valparaiso, Indiana.

"A short sale requires somebody to stick their neck out and make a decision," said White, an expert in consumer law and bankruptcy. "There are not good structures in place to incentivize losses."

THERE ARE NOT GOOD STRUCTURES IN PLACE TO INCENTIVIZE LOSSES???

Are they kidding me?

But I do understand what that whackademic is saying. And I pre-empted him with my - Marginalizing Revenue - post.

It's just ridiculous that he can frame the issue like that, as if handling *losses* is some brand spanking new aspect of the business world.

Obviously, to me anyway, one of the problems with the ginormous banks is that they have *over-specialized*; they never should have divorced the revenue and cost departments. They are NOT freakin' different ballgames; they are two halves of the only game that matters, or at least should matter - PROFIT.