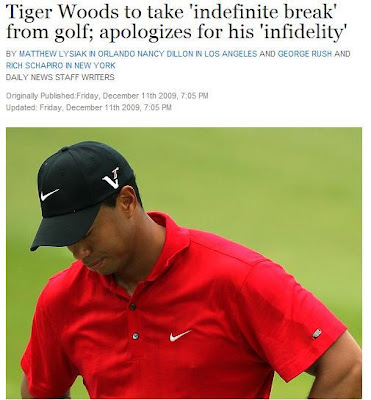 For those of you unaware....right now is professional golf's OFF-SEASON.

Furthermore, for the game's better players, it extends for a few more months - essentially into March.

Tiger, Phil Mickelson, et al have recently starting skipping the first tournament of the season, at Kapalua on Maui, and even then much of the early part of the season. They essentially try to focus the beginning of their long season around The Masters in April, and preparation for it.

Because doing so now is like, well, quitting while your boss writes up your pink slip!

There's absolutely no way Tiger skips the Masters this year.

I predict his marriage will be over soon enough.

And he'll be back on the prowl again - aiming to break not only Jack Nicklaus' record, but also now Wilt Chamberlain's.
Posted by CaptiousNut at 7:39 AM

...with all the public love and support that Barry Bonds and The Stilt enjoyed.