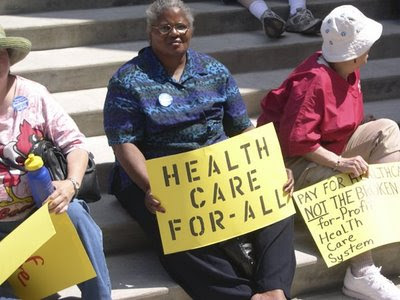 My pet theory is that all of the anger about Health Care Reform is misdirected rage at the corrupt Bailouts. I don’t want to get too Continental on you, but the conversation in Europe I encountered repeatedly was the sheer perplexity at why people are protesting health care coverage for all. One fund manager said to me in Berlin, "You give trillions to rogue bankers, yet you have 40 million uninsured American. Why is that?"

My answer: I haven’t the foggiest idea why.

He really DOESN'T have the foggiest idea about healthcare economics.

Well, for a hint, just take a look at a look at freakin' Fannie Mae, Freddie Mac, and FHA!

Freddie Mac said it didn't need any additional federal aid for the second straight quarter as it reported a loss of $6.3 billion for the third quarter on Friday.

But the company said it expected to ask for more handouts from the U.S. Treasury in the future as rising unemployment and falling home prices continue to drive higher credit-related losses for both Freddie and its larger rival, Fannie Mae.

Together with Fannie Mae, which said on Thursday it would need a $15 billion capital injection, the tab for the U.S. government's bailout of both mortgage-finance giants has climbed over the past year to $112 billion, making it one of the costliest government interventions ever to stabilize housing and financial markets.

The U.S. Treasury has agreed to provide as much as $200 billion in capital to each company by buying preferred stock that pays 10% dividends. Regulators took control of Fannie and Freddie through a legal process known as conservatorship 14 months ago

Defaults spiked. About 24 percent of FHA loans were in default in 2007 and 20 percent in 2008, according to the agency. The agency's reserves kept tumbling.

As mortgages continue to sour, the Federal Housing Administration's reserve fund continues to deteriorate. That's not a big surprise. What might be a surprise is the fact that the FHA can get bailout money from the U.S. Treasury without seeking approval from Congress.

An automatic FHA bailout is part of the 1990 law under which the FHA turns over to the Treasury any excess money the agency collects in insurance premiums after it pays out its losses. This excess money goes into an FHA emergency reserve fund. Whenever the FHA needs money, it can draw from the reserve fund. The surprising thing is that there is no limit on the amount that can be withdrawn from the the reserve fund. All FHA loans are backed by the full faith and credit of the government, so if the FHA needs more than the amount of funds in the emergency reserve, it gets it, without the need for Congressional approval.

Amazingly, he complains aplenty about the broad daylight theivery on Wall Street - even wrote a book on the subject. Yet Barry hasn't the slightest idea that it's a government sanctioned and subsidized crime zone.

I smacked the poop out of Ritholtz, and touched upon this very issue of his encyclopedic ignorance in - A Fight Where No One Got Hurt.

Only three minutes after publishing the blog post featured atop, Barry posted this addendum in the comment section:

Don’t get boggged down discussing Health Care — it isn’t my bailiwick, and I don’t have a professional interest in — but the Europeans are utterly perplexed by the debate.

The real issue is what will the Fed’s largesse and our collective refusal to hold people accountable for their actions lead to?

Why doesn't he just say *I don't understand basic economics....it isn't my bailiwick*?

The sad thing is, on politicized Wall Street, economics is irrelevant. It's all who you know, self-marketing, momentum, and luck. And relatively speaking, in all honesty, Barry knows a heck of a lot more than most of the Morons out there allocating billions of soon-to-be-worthless dollars.

[Click that last link above "A Fight..." as it contains considerable overlap to this post.]
Posted by CaptiousNut at 7:53 PM

Its all the government fault.

You seem to start from that conclusion and work backwards.

Facts, data, evidence -- not a big issue for you are they?

*Big Government, at least 30% of GDP, and with its labyrinth of regulations and confiscations....that only has a negligible effect on the economy.*

You seem to start from that conclusion and, well, do NO WORK.

I consume mountains of history books, and ruminate upon them.

You're a present-tense myope who consumes...???....probably just newspapers and other statist apologia. Or maybe you're just too lazy, indifferent, or busy to challenge YOUR long-held premises. I don't know.

I do know that I can't ever recall seeing a historical figure referred to on your blog. Why not? There's couple millennia worth of historical *facts, data, and evidence* out there that's relevant today.

FACT -You can't see the correlation between the disasters of education, healthcare, and housing as products of severe government distortion...even when the EVIDENCE is staring you in the face.

What do you think about shorting Wells Fargo here?

But what about Wells Fargo?