Enough With The TOYS 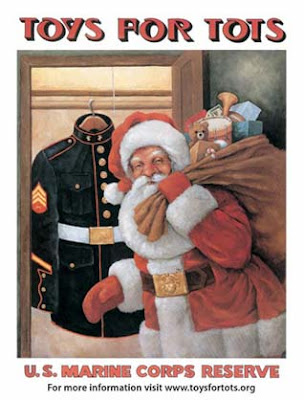 Not to pick on the Marines, but these ridiculous *toys for tots* drives are everywhere each Christmas. Yeah, my wife donated a few items this year to one at the mall - if for no reason other than to rid ourselves of unused or age-inappropriate toys we have laying around.

BUT I'm dead against this form of charity. Kids, especially so-called under-privileged ones, DO NOT NEED TOYS.

They might need parents, educational help, and the humane lessons of liberty but they certainly aren't suffering for a lack of *toys*.

Why don't we scrap the food stamps while we're at it too. When was the last time you even saw a *thin* poor person in America - no less a starving one???

If one truly wants to do something for a kid in the hood, they ought to donate their time in lieu of a frivolous, material token.

Go help them with their (yuck!) government school homework; volunteer for Big Brother/Big Sisters. I don't really know as I'm by no means an expert in the charity field. But I'm right sure that toys do nothing beyond burnishing the self-image of the donor, and conditioning the recipients to put keep their hands out.

Funny story. I did partake in some Christmas donation at my church. I had to buy a *boy's shirt, size 14* for some allegedly impoverished kid. So I went into a local sporting goods store and grabbed the first Red Sox t-shirt I saw - a David Ortiz one for $20.

Some store clerk there looked with askance at my selection - EVEN AFTER I explained that it was for some poor kid in Roxbuy. I did have an inkling what she was driving at, that Ortiz has just had an *off-year*, that after several gangbuster years and two World Series rings....that Ortiz was now *out*. She wanted me to instead buy a *Dustin Pedroia* jersey. But for a kid in Roxbury, Massachusetts???

For those of you unaware, Roxbury is the HOOD! I sincerely doubt anyone there is a big fan of that 5'9" weenie, whitey shortstop!

How many times have I told y'all that Red Sox fans, like this clueless clerk, are complete Morons? (See this old post.)
Posted by CaptiousNut at 4:05 PM

Most middle-class kids today have so much stuff that they don't appreciate any of it. (I like to call it the "$500 birthday party syndrome.")

And as for the underprivileged ones...

Having seen some of the sorry excuses for "toys" that get donated to those Toys for Tots drives, I cannot imaging that even a kid with zero toys actually derives any joy in receiving this crappola.

But if anything good actually makes its way into the donation bin, I'm guessing it gets pilfered in transit or ends up at the pawn shop.

Pedroia is a 2nd baseball not a short stop. However, i agree with this rant. My 2.75 yr old has a few toys but mainly books fill her toy box. Some of my friends comment about how few toys she has to litter our house. The best toy for this age group is just a big cardboard box.
The comment about charity in this country is right on and telling about our culture. Much easier to right a check or donate a toy then actually make a difference. My parents, both in their mid 60's adopted a 12 yr old boy a few years ago whose mother practiced wall to wall discipline. He suffers from seizures now but is doing extremely well and shares my fathers passion for mathematics. This is their second adopted child as my sister who is now 29 was adopted from Colombia when she was 4. We have had many fresh air kids, many exchange students and many foster kids stay at our farm over the years. It is safe to say that my parents suffer from the empty nest syndrome. But they tell me it keeps them feeling young.
Kfell

You know, I thought that Pedroia played 2nd base so I did a quick google. What I found said *shortstop*.

Whatever. I consider it a badge of honor that I am near the only one in New England ignorant of his actual position.

And your parents....what they do, adopting kids, that's precisely what I'd call REAL CHARITY. That's the type of life I have to work towards.