The Bounty Of Salvage

Check out this score - disinterred from my MIL's library: 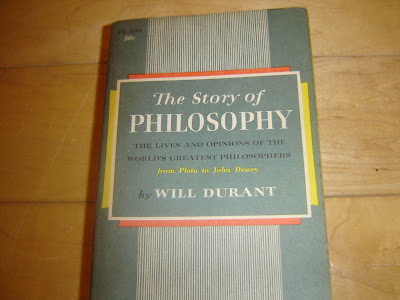 That's right, a 1954 edition printing one of his early books, first published I believe in 1927.

Check out the price in the upper left corner - a whopping 50 cents! [I had mistakenly thought every thing back then was *a nickel*...]

So what's that? 5.17% in compound annual inflation? (Check my math you Captious wannabes!)

And within the book was also this *artifact*: 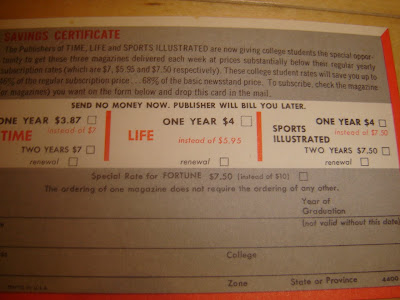 So 55 years ago a yearly, discounted, subscription to SI could be had for a whopping $4!

Obviously, Will Durant's work has appreciated more (16x) over the past 5.5 decades than Sports Illustrated (9.75x)!

The Story of Philosophy was Durant's first book, and since he labored for another 40-50 years, I highly doubt it represents his best work. But still, I believe *philosophy* was in fact Will's wheelhouse. So I look forward to perusing it at my leisure. Recall I've read The Story of Civilization in its entirety - an accomplishment West Coast Tom says I can now append to my resumé!

Here's a Durant quote from his Foundation's website which I may or may not have already reproduced on this blog:

It is a mistake to think that the past is dead. Nothing that has ever happened is quite without influence at this moment. The present is merely the past rolled up and concentrated in this second of time. You, too, are your past; often your face is your autobiography; you are what you are because of what you have been; because of your heredity stretching back into forgotten generations; because of every element of environment that has affected you, every man or woman that has met you, every book that you have read, every experience that you have had; all these are accumulated in your memory, your body, your character, your soul. So with a city, a country, and a race; it is its past, and cannot be understood without it.

Perhaps the cause of our contemporary pessimism is our tendency to view history as a turbulent stream of conflicts - between individuals in economic life, between groups in politics, between creeds in religion, between states in war. This is the more dramatic side of history; it captures the eye of the historian and the interest of the reader. But if we turn from that Mississippi of strife, hot with hate and dark with blood, to look upon the banks of the stream, we find quieter but more inspiring scenes: women rearing children, men building homes, peasants drawing food from the soil, artisans making the conveniences of life, statesmen sometimes organizing peace instead of war, teachers forming savages into citizens, musicians taming our hearts with harmony and rhythm, scientists patiently accumulating knowledge, philosophers groping for truth, saints suggesting the wisdom of love. History has been too often a picture of the bloody stream. The history of civilization is a record of what happened on the banks.

I could never recommend Will Durant enough. The man had more of an effect on my intellectual development than the rest of my *educators* combined!

For my master Durant link - click here.
Posted by CaptiousNut at 5:24 PM