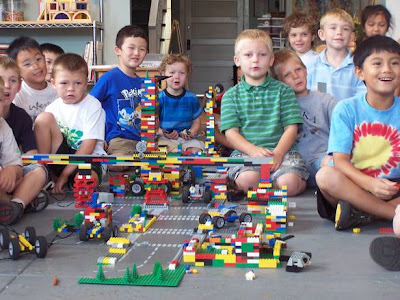 This week, our 5 year old son is attending *Lego Camp*. It was $144 for four 3-hour classes during *factory school* vacation week.

Yeah, the instructors are *professionals*, and they are allegedly teaching the kids a little *engineering*, but I have no illusions about what this is - babysitting with toys.

Except this one is not so expensive. Others, like our local *munchin soccer* I believe work out to $16 per 45 minutes PER KID. Why exactly would I spend effectively $21.33 PER HOUR, PER KID(!) to have someone chase my 3.50 and 5.08 year olds around with a ball? Obviously, being only 45 minutes long, I'd have to hang around and thus wouldn't even get some *babysitting* out of the deal. Given these economics, I'll play soccer with my own in the backyard, thanks.

What I've discovered over the past few years of parenthood, is that there's a whole bunch of quasi-entrepreneurs out there making a good living off the *kid economy*.

Last year we hired a *Star Wars* guy for my son's 4th birthday party and it cost nearly $300 for him to stay an hour or so, dress up like a Jedi knight, simulate light saber fights, and make a few balloon sculptures (of Yoda and whatnot). He was indeed good but obviously a little overpriced. He told me he did, on average, five such events per week!

I'm also aware of a *Reptile Guy* who does parties in our area; as well as a woman who makes a boatload doing *Princess Parties* all over the Boston area. And my SIL (sister-in-law) told me her town in Connecticut has a *Critter Lady* that they all use for parties.

I remember as a kid, we were just excited to GO to someone's house; we'd play ball or wrestle; and we were positively euphoric just to get a slice of homemade (boxed) cake with frosting on it.

Nowadays, my kids always leave parties with *goodie bags* (gender-coded ones to boot!) that are often larger than the gifts.

People today, especially in the tony little towns, do indeed spend a lot of money on their children - probably nearly half as much as they do on their pets!
Posted by CaptiousNut at 11:07 AM

Maybe I'm giving you too much credit, but I am shocked to find out that you are one of the increasingly common nut jobs who feel it is necessary to drop 500 bucks on a 4 year old's birthday party.

If you are willing to spend that kind of dough on an insignificant 4th birthday, then can one of those over-the-top, obnoxious, spoiled-brat, look-at-me, MTV-style "Sweet 16" parties be out of the question in 12 years?

Although my daughter's 3rd b-day extravaganza in June cost $1,000.

But it was 70 people and we essentially made it our annual *adult* bbq.