For those of you unaware, Bananagrams is the hottest new game out there today. It's a much better version of Scrabble because it obviates Scrabble's biggest weaknesses: a stale board, the luck of double and triple word squares, the tedium of being stuck with bad tiles, and the agony of waiting one's turn.

I made my wife buy it for me, and the homeschooled kids. Though admittedly it's currently a bit advanced for them.

The only downside to Bananagrams is, well, its history. Some knucklehead *invented* this simple little game amd is reaping millions!

Nathanson, who sank $50,000 of his own money into launching the game, attributes its runaway success to four factors: the catchy name, clever packaging, how much fun it is to play, and the family history behind it. Rena Nathanson, Abe’s daughter, who has been instrumental both in refining the game and bringing it to market, adds a fifth and sixth: modest cost (about $15 ) and portability.

"The price is magic," Nathanson agrees. "It’s a game that practically sells itself, which is why it makes no sense to discount it. That’s a stupid, greedy American mindset I don’t agree with." 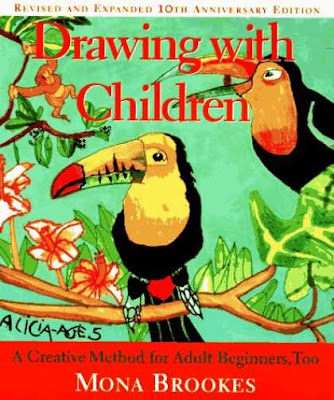 At the bookstore the other day, I purchased Drawing With Children - a book I had seen highly recommended in a homeschooling magazine.

I've only read the first 15 pages or so of it, but so far I'm VERY IMPRESSED.

Flashback....here's what I sensed and wrote about *drawing* in - Art From My Butt:

One thing that appeals to me about these *lessons* is that teaching kids to draw is progressive - not at all unlike going from the alphabet to composition or from finger counting to combinations and permutations. They really just need to learn the building blocks, practice a bit, and accept nudges from sagacious adults.

Reading the opening of this book only confirmed my hunch. Drawing IS progressive; there are fundamential building blocks; it cultivates creativity; etc.

Check out the reviews on Amazon if you're interested.

Essentially, I've quickly come to see art as one of the many essential subjects abused by government schools and the like (i.e. most private schools). So it's surely going to be paramount in our homeschooling going forward.
Posted by CaptiousNut at 8:32 PM