Paid Up For The Droid 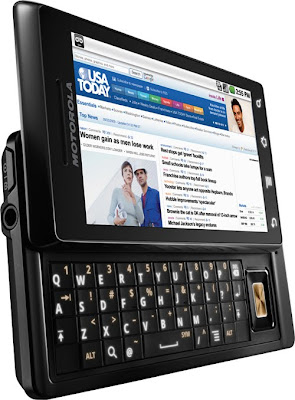 Yesterday my cheap clamshell phone broke in half. The hinge had been hanging by a thread so it was inevitable.

Luckily my phone contract was up.

As I discussed previously, I'm one of these suckers who overpays for cell service because, well, I don't really use it enough to justify even the cheapest bundle.

I strongly considered going the pre-paid route and trying to make do with that iPod Touch that I just fell in love with recently.

The only problem was, I loved it too much. I figure if merely having occasional pocket email access was soooo much more productive....then a souped up PDA phone might be well worth the expense.

I really hadn't made up my mind which way to go when the situation came to a head in the form of my bisected phone yesterday.

So today we went to Verizon store and just anteed up for the snazzy new phone. $150 (after rebate) for my Droid - then they sucker you in to buy a case, covers, etc. My wife got a new cheapo phone for nothing with her rebate. All told we are paying $100 a month for 700 cell minutes on the two phones, my email and data, and however many texts $5 buys me per month. My wife has a corporate discount so the monthly bill would otherwise be $125.

It does seem like a lot, but effectively the bill only went up $25-$30 per month.

I must say it was a delight to go into the Verizon store this time. They took my old, severed phone and transferred all the contact info into the Droid; and did the same for my wife's new phone. If memory serves me, they used to charge for this, didn't they?

Though I'm still fumbling my way around with the tiny pull-out keyboard and the Droid's functionalities....so far I'm loving it!

But now we have a superfluous iPod Touch that we'll probably sell...

C-Nut Ventures Back To The Future

The Three Horses
Posted by CaptiousNut at 10:03 PM

Having researched this thing to the nth degree, you shall only like it more in the future. Mashable ran a poll the other day with Droid against iPhone and it was not even close, Droid lapped the iPhone three times.

I can't wait until the Android OS becomes even more mainstream. The possibilities of the open source will bring business developers in in droves.

Of course, Android will probably never get the game apps like iPhone has. Because we all spend so much time on the DAMN phone playing games.

You're too chauvinistic about some things.

How do I get the thing to stop screaming "DROID" or whatever it says when it's done charging or going into power save(?) or something?

I am having trouble typing the top row of the keyboard.

C-Nut, you can just use the touch keyboard instead of the physical one, you know? The qwerty is kinda tucked away.

And add the power control widget to the Droid and you can get rid of that alert.

Please keep in mind that I am utterly RACIST regarding footwear. Crocs only for me, you know?

Try this app for your new phone.

Yesterday, I had some homeschooled teenager bore me to death for 15 minutes over the Droid's deficiency as compared to the iPhone.

Finally I had to cut him off and tell him that *cool* was not anything I cared about. These kids need jobs!

Still trying to figure this thing out. Baby steps...

It is pretty cool how I can listen to a Pavarotti YouTube video while I'm doing the dishes.

I guess I should use it to do an inaugural blog post from afield...

Check out the market and just start typing search words and see what kind of apps come up!

How often do you guys have to charge yours?

Is it because I am leaving stuff open that I don't know about?

What is this power control widget you are talking about?

I've googled but couldn't figure out what I needed. Is it related to managing battery life?

Yes, it is related to power settings and lets you turn on and off backlighting and things, like the charged alarm.

From Home, hit menu, then add, then widgets. Install.

I thought the same thing at first but I think the battery just takes a few power cycles to get to full capacity. The first day or two I had it I ran it down almost all the way with light use. Today I was on my phone all day long, hadn't charged it since mid-evening yesterday and I still had 30% right now when I charged it again. I talked for a good... 2+hrs on it, went on the net, had it checking for emails every 15 mins, etc. So I am much happier with the charge now.