In Favor Of Threesomes 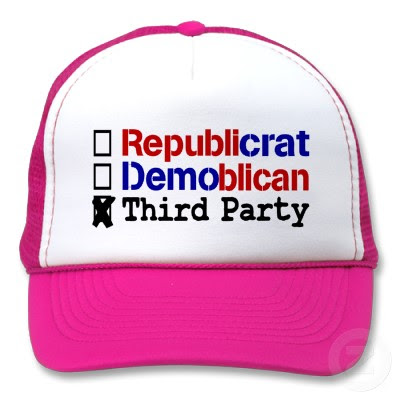 RUSH: While I have your attention: third party. This third-party stuff has got to stop, folks, unless you are for a third party for the Democrats. I'm all for Ralph Nader running again. I'd love for Howard Dean to get fed up or some other Democrat to get fed up with Obama and I'd love for a third party of Democrats and liberals to establish itself. I want all kinds of liberals to line and up run in third parties. That's how we weaken their side. As for our side, the focus must be to take back the Republican Party. That's the way you win. You can draw attention to yourself by denouncing both parties at the same time, and you can think that you're relating to a whole lot of people or being disabused and forgotten about, but you do a grave disservice in doing so because you're never going to win anything. You're going to guarantee Democrat victory in perpetuity. We need a strong conservative movement that takes back the Republican Party and then we have a strong Republican Party. It's hard work but it is happening.


There is a conservative ascendancy here. Why in the world waste what is happening here with this new conservative ascendance and weaken it and split it up by forming a third party? So far, not a single Republican is going to vote for government-run health care. If the parties were the same the vote would be unanimous, would it not? If the parties were the same, all the Republicans would be on board for this, in the House and the Senate, and they're not. I think one Republican in the House voted for government-run health care. When cap and trade came up, eight Republicans voted for it. The rest voted against it. In the Senate, all but a couple of Republicans voted against the stimulus bill. If the parties were the same, sweeping majorities, health care would already be the law of the land if the Republican Party was the same as the Democrat Party. There wouldn't have been any tea parties. We wouldn't be having to mess around with all these various bills and CBO scores. But, folks, it's all out in front of your face. It's right in the middle of your face, right in front of your eyes. The parties are not the same. We need more of this, and you don't get more of this by insisting that there's no difference between the parties.

Now, I'm the first to tell you, and I'm the first to agree that the Republican Party has screwed up and it needs to continue to find its legs, and with our help, it will have no choice but to become a traditional conservative party. We don't have Marxists in our party. We don't have Maoists leading the charge in our party. Those people have found a home in Obama's party and government but not in the Republican Party. The problem is that there are people trying to confuse the issue. They're saying, "Well, the Republicans spent too much and they did this and they gave us new entitlements, they spend just like the Democrats, they all spend, they all spend the same." I get that. I fought them on those things. I was deeply upset and opposed to a lot of this spending. I had emissaries from the White House sent down here to try to get my mind right on these things. But they are not, as a matter of ideology, the Republicans are not seeking the destruction of capitalism and the private sector. They are not trying to hollow out the military. They are not undermining our intelligence services and so forth.

The Republican Party has lost its way because of one issue: Abortion. The Ivy League Republican-in-name-only so-called moderate Republicans who are truly liberal Republicans do not like the social issue of abortion and other social issues like family values and morality and all that having a role in the party platform. It's as simple as that. They didn't like it when Reagan ran the show and was winning big landslides. But they are not Marxists. They are not Maoists. They do not hate the US military. They are not apologizing for the United States of America around the world. Snap out of this! There's no difference between the two parties. The Republican Party right now has lost its way. This conservative ascendancy can help it find its way. The Democrat Party has found its way, and it's the radical left way, and that's who they are now, and they have to be stopped. And they will not be stopped if a third party ends up being the result of this little internecine war in the Republican Party. They will be in power, the Democrats will be in perpetuity if a third party emerges out of our party.

RUSH: Look, the truth is, folks, that most of us know that the two parties are not the same. We're hearing a lot from the same people, or thinking that surrounded the Ross Perot effort or the Reform Party effort, more generally. It seems that some people are trying to tap into this group and then claim it represents most conservatives, Libertarians, Republicans, when in fact it doesn't. Now, we always had populist movements in this country on the left and the right. But we are not populists, we're constitutionalists, we are conservatives. And when a majority of us are in control of the Republican Party, the Republican Party wins. But it's not gonna win if there's a third party.

Rush is off-base on many points here. Just to give one example, at the end there he tried to paint what can only be libertarian dissent as a *populist movement*. That's a load of bull, if not complete truth inversion. The libertarians that I know are all geeked up to tell the public, "No more entitlements, no more government jobs, no unemployment insurance, no Social Security, no Medicare, no student loans, etc."

Sorry Rush, but that ain't *populism*.

Again, there's plenty of anti-sense in there but I haven't the time or the inclination to fisk it all.

At root, I believe Rush is ignorant about what a political *party* essentially is and the reality of what even the most well-intentioned ones degenerate into. 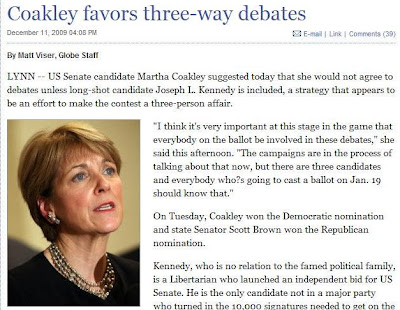 However, a libertarian by the name of Joseph Kennedy has garnered 10,000 signatures and will be crashing the ballot for Ted Kennedy's empty Senatorial seat:

LYNN -- US Senate candidate Martha Coakley suggested today that she would not agree to debates unless long-shot candidate Joseph L. Kennedy is included, a strategy that appears to be an effort to make the contest a three-person affair.

"I think it's very important at this stage in the game that everybody on the ballot be involved in these debates," she said this afternoon. "The campaigns are in the process of talking about that now, but there are three candidates and everybody who?s going to cast a ballot on Jan. 19 should know that."

Having a three-way debate would help Coakley, the front-runner in the race, and would make it harder for Brown to clearly differentiate himself from Coakley. As a libertarian, Kennedy is also more likely to pull votes from Brown than he is from Coakley, so giving him broad exposure on a televised debate could hurt Brown's chances.

This has just GOT TO BE making Rush Limbaugh's blood boil because....

Because if somehow the Republican were to win, and Scott Brown gets to vote on Obamacare....it might not pass. (Though I'm sure they'll just ram it in the day before he gets into office.)

And obviously, the Coakley camp has made the calculation that the libertarian renegade will only hurt Scott Brown when it's all said and done - JUST AS RUSH HAS PREDICTED.

All of this conjecture may or may not be true. But the trilemma remains, what should Joseph Kennedy do if given the chance for a three-way debate.

Should he admit practical defeat and bow out - in an effort to hurt perhaps a greater evil?

Should he, in the course of a debate, go hard at both opponents?

Or should he partake but *gang up* on the greater evil?

I'll tell you this, if it were me, I'd come out with guns ablazing in both directions!

No, it's beholden to the naked truth. Go incite a ruckus and however it turns out, it turns out. Democracy, like life anyway, is and should remain *messy*.


Personally, I think the Republican party should disband.

THAT would hurt Big Government and its apparatchiks worse than anything.

And it just might send the bane of *party politics* into a toilet spiral.
Posted by CaptiousNut at 10:39 PM

If I were Coakley, I'd just be worried about the state law that we all have to vote for people with the last name of Kennedy.

Amen brother, I voted for Bush in 2004 because of the alternative and I still feel guilty. I think I will just continue to right in Ron Paul's name on every ballot I come across now.
Kfell

Life is to short to spend any of it on Rush, The Donald, etc, etc etc.

Judd Gregg has become a complete disgrace to NH...His debate with Ron Paul on CNBC.

Hey! That's false advertising. I was expecting something else...

Now off to stop this BCH nonsense.