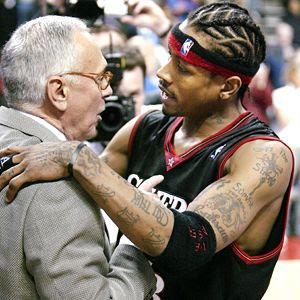 CHARLOTTE -- Charlotte Bobcats coach Larry Brown, a longtime confidante and former coach of Allen Iverson, expressed disappointment that the 76ers reportedly offered Iverson a one-year, non-guaranteed deal Tuesday. Iverson has yet to accept the contract but Philadelphia is the lone team to publicly express interest in Iverson after his messy departure from Memphis.

"That upsets me a little bit," Brown said. "I’m just looking at how that looks. But he just wants to play. I get worried about that message personally. But I also admire Philly for giving him a chance, that’s more meaningful for me. I look at a [player] that’s scored 20,000-plus points, played hurt and did so much and now he’s got to play for a non-guaranteed contract. That’s pretty troubling for me..."

Let's see, Allen Iverson is a pass-fourth point guard, who's over-the-hill, a thug, and a proven team cancer. Nobody wanted him this summer when he was a free agent. And nobody, save for an irrelevant and injury-riddled Sixers team, wants him now.

Yet for some reason Larry Brown thinks we should all feel bad about the *diss* of a non-guaranteed contract?

Last I checked, Larry is coaching the Bobcats. Why the bleep aren't they opening up their checkbook for the Answer?

Somebody please remind Larry Brown that Allen Iverson was paid $153.3 million over the course of his career - so what difference would an additional guaranteed 800k make?

FURTHERMORE, the guy with his antics, obviously hasn't earned any such rights!

Let me ask y'all something.

Telling others to sign and pay Iverson - when his organization most hypocritically won't...

Lamenting about what some two-bit thug *deserves* in the face of the marketplace clearly asserting otherwise...

And wielding emotional arguments about *career achievements* and what entitlements should follow...

My question is this:

What types of politicians do y'all think Larry votes for?

It's not so hard to discern, now is it?
Posted by CaptiousNut at 9:31 PM

He was admitted to Georgetown, and they would never accept a thug. I think he was able to complete his degree in less than a yr as well...

Well he was in jail before college, if memory serves me. Something about a *racial* bowling alley riot.