I just received the mortgage history on my Moronic landlord's house:

That may be incomprehensible at first, so I'll explain.

My understanding all along, straight from Moron's big mouth, was that he owed *$1.2 million* on the place.

Given that, I think it's safe to assume that only the last two entries constitute his debt at the moment.

Never heard of "Greenpoint Mortgage"? I never really did either. In terms of basic information, there's not much out there on the web. I know they were bought by North Fork Bank - which was swallowed up by Capital One - which ended up dissolved the entity because of an *inability to sell its mortgages on the secondary market*. Wikipedia also describes Greenpoint as *one of the first innovators of Alt-A mortgages*. Go figure.

So who owns Greenpoint and essentially the house I live in? I can't figure that out. Googling first suggested it was Countrywide/Bank of America, but then I read elsewhere that perhaps they might just be *servicing* the loan. But remember there was that photographing ninja caught outside my door from GMAC. So who knows which of these tax-payer supported banks actually holds the title.

But getting back my landlord and his serial mortgaging...

Mortgage rates were indeed falling over that period, so refinancing wasn't such an unpopular tactic.

EXCEPT, that that he wasn't just refinancing the same amount, he was obviously extracting every bit of rising equity the banks would allow. These were *cash-out* refinances; and the loans were as *exotic* as could be: interest only, adjustable, etc.

This guy also, clearly, shopped around for the most lax lenders at each turn. I see that loan up there from Wells Fargo and I start scratch my head because this house, maybe for a minute at the euphoric peak of the market, was at best worth 700k. So who at Wells approved a $750,000 loan on $700,000 worth of collateral from 2,800 miles away? Lucky for Wells, greater fools were found down the road to take this risk off their books.

After three rapid-fire extractions, got the total nut up to 600k...

Then he refi-ed that with Ameriquest - another *gone* lender...

One more extraction got his total debt to 750k...

Then Wells Fargo refi-ed that for him (at the top of the market)...

And it looks like Rockland Trust was the principal Moron (no pun intended), because they let him extract a whopping 240k(+) above the already underwater home's value. AND, they did this in April 2006, after the market had started its retreat...

Then the crook found two fly-by-night entities in Allied and Greenpoint to cap off this lunacy, at even higher ($1.2 million) prices and even further into a sliding market.

I'm going to stop here because I have to run.

One thing that troubles me, is that this scumbag's name shows up on this report....SPELLED FOUR DIFFERENT WAYS!

Go ahead, tell me that wasn't some deliberate skulduggery!

I won't believe you for a second.

This house (as well as three others!) was indeed a veritable ATM for my landlord.

The guy stole a whole lot of money. By my count, he extracted about $4 million in total from four different properties. Unfortunately, for him, he wasn't smart enough to keep it. In fact, he squandered every single penny.

(Note - the rest of us would have to gross $8 million in ordinary income to enjoy such lifestyle. In other words, I'm reminding y'all that he didn't pay income taxes on his *income*.)

As the walls of reality (and the repossessors!) are closing in on him. As his credit cards get turned off, his subprime business evaporates, his bills pile up, and his tenants(!) fight back...

I think the following is an apt image of my landlord thinking about his ATMs of yore: 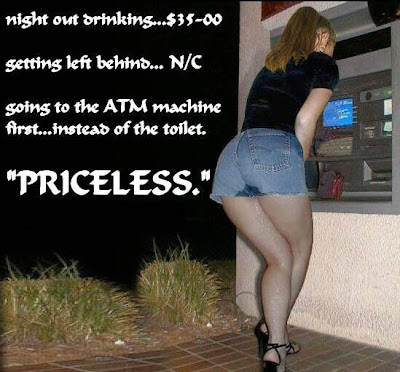 Posted by CaptiousNut at 4:25 PM