A Coach To Watch?

I meant to comment on this one last week: 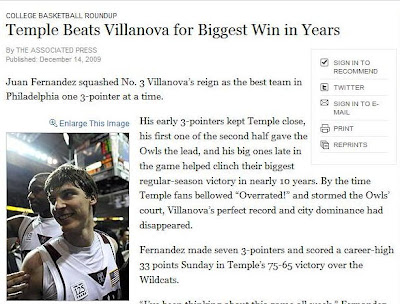 So why is this blogworthy?

Well, Temple is now coached by Fran Dunphy, a man whom I watched coach my alma mater, UPenn, for years. As far as I could tell, Dunphy was a coaching genius. I continually marveled at what he did there, competition-wise, with some real scrubs. (Though he did have a couple guys get some run in the NBA in Jerome Allen and Matt Maloney).

But the rest of Penn's rosters were constituted of nobodies - nobodies who for years played over their heads. In my calculus, it just had to be the coach.

Three years ago, Fran Dunphy left Penn for cross-town (sports) rival Temple - a school not hampered with *Ivy League academic standards*. Obviously, Dunphy was going to get a chance to work with a significantly deeper talent pool. At the time I predicted he'd flourish.

One game certainly does not a career make, no less a season. But I'll be keeping a occasional eye on Fran's Temple Owls, their record anyway; and won't be the least surprised if he makes a real name for himself there.

Penn has a somewhat of a storied coaching history. NBA coaches Dick Harter and Chuck Daly both did stints there, at the Palestra. 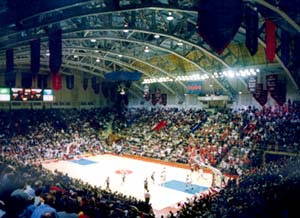 One of Dunphy's *scrubs* was a light-skinned, cocky-a$$, pogo-stick by the name of Donald Moxley.

The guy ended up a starter, albeit only late in his career, and even hit a game-winning shot in a Big Five game at the Spectrum if memory serves me.

Nevertheless, even more prominently, he starred in the capstone of MY basketball playing career. Let's just say that the gap between his self-image and his ability was cavernous. And these types, LONG before my first blog post, were always in my sights!

So during one pickup game, he flew through the lane right past two tall trees,...did some dipsy-doodle, double-clutch....I came out of nowhere and rejected his weak poop not only off the entire court, but I sent it so far down a long hallway that we had to send an Asian kid down to fetch the ball!!! Everyone was ooohing and ahhhing. Quietly he muttered something about it being a *good block*.

Luckily one of my buddies was there and witnessed me schooling one of Dunphy's guys....otherwise there'd be NO WAY any of the scoffers would have believed me.

See also - Obsessions Of Yore.
Posted by CaptiousNut at 11:11 PM

Dudes who hate on liars and bum ass ballers said...

You're the type of guy who WISHES he was good enough to even stand on the same court as a Division I basketball player... to make such a shallow blog and even a more ludicrous part of playing defense is quite absurd and asinine... just like your blog... don't be upset no one ever thought you were good enough to play at a high level of competition... it just shows your lack of abilities. Too bad for you... the real scrub of this blog... its truly pathetic for you to pop smack about someone who doesn't know you from a can of paint AND it is a true showing of the lack of character you have... and since you had ZERO comments left for this ridiculous blog and story it contained I will be kind enough to leave your very first one for you... as an NBA player once told me about guys like you... "You sirrrrr.... ARE A LOSER! (Holding up the capital L sign)

Nice to hear from you...