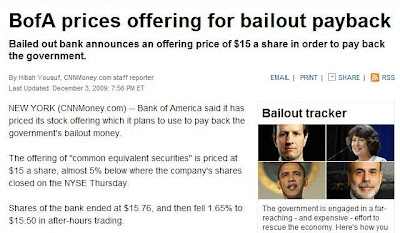 I guess I have to keep commenting on my buddy Ken Lewis and his circus act departure.

Two days ago, BAC annouced they would *repay the TARP* money that was half-forced on them by the government.

Now there're a whole lot of things happening here so the event has to be carefully dissected.

Earlier this year, as BAC stock spiraled to $2.50 a share (!), Ken Lewis was out there saying that he *never should have taken so much money* that some of it was *forced on him*....and that they'd *pay back the money by the end of the year*. Most of this whining was ridiculous; a CEO shouldn't care about stock price fluctuations. It's simple, if your stock unfairly goes to 2.50, then management (or private equity) should be buying it back - at least all of those dilutive shares it grants itself each year!

So here it is the end of the year and it Ken is paying back the TARP money.

More accurately, I submit that CURRENT SHAREHOLDERS are paying it back since they are being diluted to the tune of $19 billion.

At this very moment, Bank of America is trying to find a successor to the embattled, Moronic Lewis. The details of which were covered in - Titanic Can't Find Willing Skipper. Essentially, a cadre of idiot pundits and whatnot believe that having borrowed (more) money from the Federal government, that such a yoke was making the open CEO job unattractive to the *good candidates*.

Side Note - Do y'all think ANY veteran from the banking industry, ANYWHERE, over the past several years has displayed the acumen needed to head Bankrupt of America?

I certainly don't. They need a perspicacious, Captious outsider.

You see, whether BAC shareholders(!) pay back the TARP money now or not is beside the point. The Feds have demonstrated that they can be tapped, whenever, with impunity, henceforth!

Okay, moving on to the dilution.

I'm no forensic accountant, but apparently even those dudes can't understand the financial legerdemain that's being passed off by the likes of BAC, JPM, WFC, C, et al.

Minimally, that implies that Bank of America LOST $19 billion in the past 12 months or so.

I say 'minimally' because these banks are leveraged - probably at somewhere between 5 to 10 times its capital base (if not way more).

So a $19 billion capital injection, to my amateur accounting intellect anyway, implies that BAC LOST or *wrote down* at least $95 billion in its assets over this period.

And, mind you, these are merely the recognized losses in a time where the banks have been given license to mark-to-myth their assets. Just imagine how big this dilution would be otherwise.

I've read a bunch of the media reports on this recent news and clearly, nobody really got what happened.

The idea that BAC paid back the money because *they no longer need it* is a complete joke.

As was this little *can't find a new CEO....ergo we have to dislodge from the Federal teat* soap opera.

The fact is, Bank of America is losing money hand-over-fist; they raised capital because they NEEDED CAPITAL - and they'll need plenty more.

Luckily for shareholders, the stock has magically tripled off its March low - otherwise the dilution would have been exponentially far worse.

Another important thing to remember is that this wasn't a classic case of *raising money...to invest money*. No, the money they raised is already gone, already sent back to the Feds. BAC's balance sheet hasn't improved a lick from this transaction.

All it did was jam the shareholders....

And give the board/management the cover to go on doing the things they did which got them into this mess in the first place! 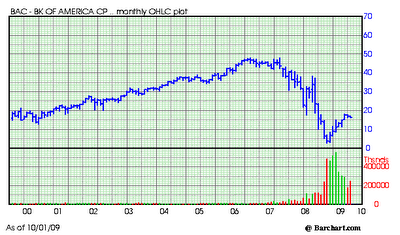 I can't believe I made the same mistake as Ken - forgetting those 3 extra zeroes.