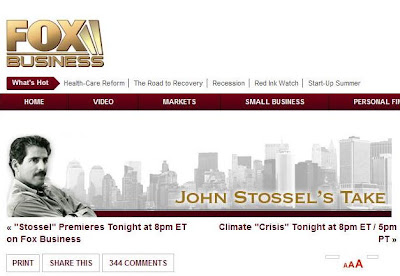 I was just reminded that John Stossel had migrated emigrated over to Fox - the upstart Fox Business Channel anyway.

It also looks like Stossel is *blogging* on the FoxBusiness.com. There's no good link straight to his stuff, but you'll find him easily. I can't tell if he's responding to commenters or not. These things are worthless, and on borrowed time, if the authors don't interact.

Furthermore, commenters can't be hyperlinked to their own blogs/profiles....and this will certainly keep me from posting anything. Heck, I'm not even sure one can post a link within a comment. That's not very libertarian now is it?

All of these Big Media companies are clueless about regulating discussion forums. It's simply not THAT HARD to dedicate one sagacious individual to monitor every comment that comes in. They can easily *warn* frisky commenters, delete their comments, and identify and remove spam. Instead they have this command-and-control nonsense with *commenting policies*, *no links*, and ham-handed *moderation*.

A full fifteen minutes ago I submitted an innocuous comment on Why BofA Wants BONY's Kelly - yet it's still held in virtual abeyance somewhere. No wonder that post has been up for 12 hours now WITHOUT a single comment.

She's a good read though, usually, that Elizabeth MacDonald.
Posted by CaptiousNut at 9:00 PM