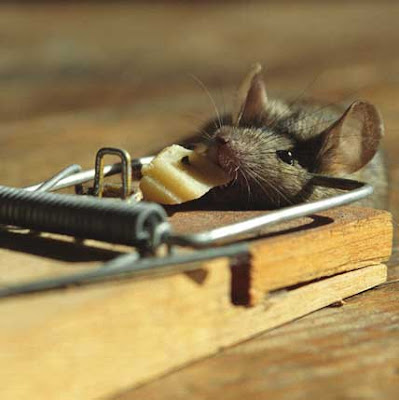 Let me just say that I have been blown away with all the positive feedback from my *rodent* posts. People keep emailing me left and right expressing their compliments and enthusiasm for these recent blog episodes. More pics! More pics! More pics!....that's all I hear. Someone's even hellbent on my filming a mouse in a *glue-trap death struggle. "Pull the trap down as soon as you get a 'nibble'...," is what she says over, and over again. Personally, I'm afraid of getting bitten! Not to mention, I'm trying to economical and snag a few per trap.

Anyways, today I came across a passage in a book I'm reading that, well, sort of addresses these deranged rodent sadists:

Insull's Chicago was a rough place. Before the war a college student from Indiana named David Lilienthal described his experience on a visit in 1917: he came across a crowd surrounding a puddle, and stuck his head among others to see "what these busy-men-of-the-world were watching with such evident enjoyment." It was "but a tiny mouse, swimming about in a pool." Lilienthal was disgusted to see that "whenever he would struggle to a place of safety - someone would stick out his mahogany cane and throw the poor quivering thing back to his death. When this would happen," Lilienthal noted, "some portly comfortable looking son-of-a-gun would shift his cigar and chuckle." The young man commented on the Chicagoans in his diary: "And such creatures expect mercy for themselves from some higher authority, as they are to mice!"

What a college weenie, huh?

I think it may have in fact been one of his descendants who turned me in ratted me out!

See the latest episode, and a link to preceding ones - here.
Posted by CaptiousNut at 7:07 PM

Well, it's proof that people are shit.

Reading it, I shake my head. Some sadist wants to actually have you record a "glue trap struggle". Would you actually do such a thing?

I like your blogs, have been reading them for some time... but come on.