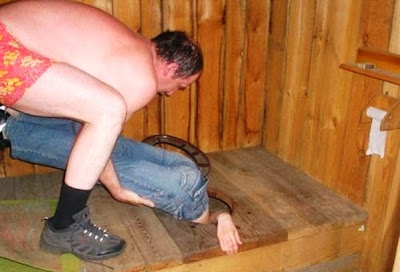 Several years ago, my wife (girlfriend at the time?) confessed to me that her phone died because of a *toilet descent*.

Today, it was revealed that a friend of ours also suffered the same ignominy - her iPhone somehow found its way to the bottom of a basin. [And, not for anything, she's been dying to be a blog *subject*.]

I'm not sure, but isn't that a few hundred smackeroos down the *drain*?

I just don't see how it happens. Their knees are knocking, right? The geometric odds are slim, no?

And how about that pic? Could you imagine being lowered into a *pit toilet*???

UPDATE - This was written late last night, under the influence.
Posted by CaptiousNut at 1:19 AM