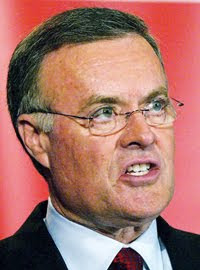 CHARLOTTE, North Carolina, Dec 2 (Reuters) - Bank of America Chief Executive Kenneth Lewis said he does not believe housing will face another big downturn, as some fear.

Ken, slated to retire very soon, is going out like, well, George Bush!

I could offer many refreshers here on things Lewis has said in the way of erroneous economic predictions....but in the interests of brevity, I'll just offer one.

Let me ask y'all a question - How's the high end of the housing market doing near you?

Recall that nearly a year ago, Ken Lewis' Bank of America aggressively jumped into the jumbo mortgage market and became the nation's biggest such lender!

Ken doesn't see another big downturn in housing....and that alone ought to make every over-leveraged homeowner homeborrower in America pretty darn scared.
Posted by CaptiousNut at 9:24 PM