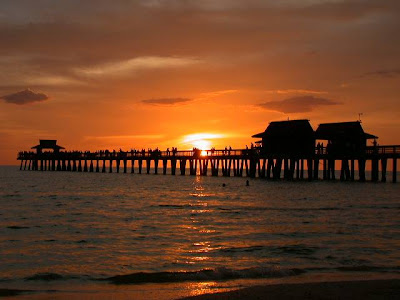 I will not be triumphantly returning to Naples this winter as the *youngest snowbird*.

Recall last year I slipped away for the entire month of January with my family - though my wife was there for only maybe 13 days.

It was a blast. After getting our *work* done each morning, we hit the beach, the park, met up with friends, ate outside, etc....all the while Massholes were taking on 3 FEET OF SNOW for the month. Our timing was impeccable!

My kids didn't get sick once all last winter - and the warm weather retreat really took a bite out of the 5-month New England winter.

All year long I vowed to go back in 2010, but this time for two full months.

Alas, last year I was rich, this year the bear market levitation has impoverished me.

One month would cost, all told, between $5,000 and $6,000 which is still very financially affordable.

But this year is different. Last year, one of the prime motivating reasons for going was that my wife was supposed to be away for most of January, working in New York. So why should me and the kids suffer up in Boston when there was plenty of available real estate down in sunny Naples?

It turns out, most of her New York trip got cancelled. So for maybe 17 days she was here in Boston working and coming home alone to an empty, snowed-in, freezing house.

This year's pipe dream would have had her fly down for two additional weekends - so another $700 or so to mitigate this obvious downside. (She'd come down for a full week as well in the middle of the month, as she did last year.)

But there's also other financial stuff going on.

We are in dire need of not one, but TWO new cars.

I very much need a new soup-ed up desktop computer.

AND we have this drama going on with the landlord. We may have to end up moving for March 1st - an ordeal I'm certainly not looking forward to. As the family gets bigger, moving gets more expensive, and more laborious.

Yeah, we could still swing a Florida stay, but it just doesn't seem like a prudent thing to do at the moment.

Though one just never knows. Last year, we didn't decide to go until maybe December 30th. We responded to an ad; wired some money; and then jumped in the car that same day!

So the big trip is a long shot. Instead we'll likely do a smaller trip or two - crash with friends....just as we used to do every year before last.

And it goes without saying that I will embark solo at least once, to play golf somewhere.
Posted by CaptiousNut at 10:09 PM

Dude, take your vacation. If you can afford it, go to Naples.
Whatever problems exist in MA can wait.