Joining A Club That Can *Afford Me*

Of course there's a huge wasteland of struggling and bankrupt golf clubs down South and out West...

But the pain is starting to hit the old courses in the Northeast, ones that weren't pure products of the housing boom.

Above is Hatherly Country Club, a course maybe 35 miles south of Boston.

2.5 years ago, before moving to the South Shore, I called up and inquired about membership - just for kicks. I recall hearing *waitlist* and *5 years* from the condescending 'old bag' who answered the phone.

BUT recently I heard that Hatherly decided to open its membership doors, and that they started dialing names on their waitlist. EXCEPT, apparently, they called everybody on the list....and EVERYBODY said *no thanks*! (No confirm on this; so it's complete hearsay.) 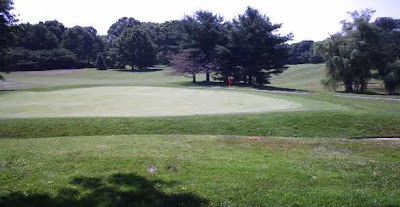 Then, just the other day down here on Long Island, I heard that North Hempstead, a private club just east of Queens had dropped it's membership price to *ZERO*!

Obviously, they're settling for people just paying dues - which, by the way, seem steep at $12,000 per year plus a couple grand more on food. (Again, no confirm on any of this.)

Note that this area of Long Island is considered *Wall Street* territory.

I predict that some of these clubs up here will soon fall into financial death spirals, much in the manner of these bankrupt municipalities. They'll hit members with assessments; which will cause more dues-payers to leave; and their departure will only aggravate the books.

But at least municipalities can declare (or threaten to declare) bankruptcy and raise taxes....bloated country clubs have no such recourse.

Golf in the Northeast, with our short days, wet weather, and 7 month seasons has never been much of a value proposition. For 12k a year, one could plan 3 or 4 lengthy golf trips, say one to Ireland, one to Arizona, and one to Florida or Myrtle beach. After all, these clubs are so expensive that you have to WORK a bunch just to be able to afford them. So when are you going to even play?

(BTW, the title is a re-jiggered Groucho Marx quote.)
Posted by CaptiousNut at 10:29 PM

This has been going on for 2 years in Cali. I recently played (what a stupid game) with a buddy at his club who said memberships ($50,000 in 2006) could be had for free from people who need to get out from under the monthly nut.

I'd imagine that many of these clubs are facing *delinquent* members at the moment.

Not sure how easy it is for them to sue people - especially people who now have no means.