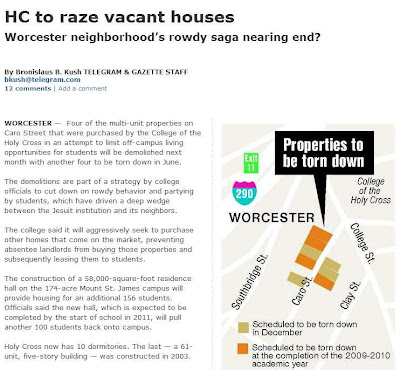 I saw that curious headline last week in my parents' local agitprop rag over Thanksgiving.

HC is The College of the Holy Cross, probably Worcester, Massachusetts' best and most widely known attraction.

The demolitions are part of a strategy by college officials to cut down on rowdy behavior and partying by students, which have driven a deep wedge between the Jesuit institution and its neighbors.

The college said it will aggressively seek to purchase other homes that come on the market, preventing absentee landlords from buying those properties and subsequently leasing them to students.

So let me get this straight, the college punks are rowdy....so the school is going to demolish nearby buildings?

Doesn't that strike y'all as a pretty *blunt* solution?

Now that same holiday I got to spend extensive time with two of my intellectually superior uncles, both of whom happen to have attended Holy Cross back in the 60s, before it went co-ed, and when it was allegedly ranked *up there with Harvard*.

On Thanksgiving, one of them told me about a professor of English he had at Holy Cross. Every week, the instructor, a priest I believe, would, in addition to a class, meet individually with each student for a half hour or so.

During that time, each pupil would generally have to present/read the paper they were assigned the week before.

So after one such meeting, Rev. Thomas Grace said to my uncle,

"For next week, I want you to read the Snopes trilogy by William Faulkner. And I want your paper to compare imagery, symbolism,...across the three books."

For example, from Absalom, Absalom!:

From a little after two oclock until almost sundown of the long still hot weary dead September afternoon they sat in what Miss Coldfield still called the office because her father had called it that-a dim hot airless room with the blinds all closed and fastened for forty-three summers because when she was a girl someone had believed that light and moving air carried heat and that dark was always cooler, and which (as the sun shone fuller and fuller on that side of the house) became latticed with yellow slashes full of dust motes which Quentin thought of as being flecks of the dead old dried paint itself blown inward from the scaling blinds as wind might have blown them. There was a wistaria vine blooming for the second time that summer on a wooden trellis before one window, into which sparrows came now and then in random gusts, making a dry vivid dusty sound before going away: and opposite Quentin, Miss Coldfield in the eternal black which she had worn for forty-three years now, whether for sister, father, or nothusband none knew, sitting so bolt upright in the straight hard chair that was so tall for her that her legs hung straight and rigid as if she had iron shinbones and ankles, clear of the floor with that air of impotent and static rage like children's feet, and talking in that grim haggard amazed voice until at last listening would renege and hearing-sense self-confound and the long-dead object of her impotent yet indomitable frustration would appear, as though by outraged recapitulation evoked, quiet inattentive and harmless, out of the biding and dreamy and victorious dust.

And not only did my uncle have to read all those pages...

He had to PAY ATTENTION, UNDERSTAND, and COMPOSE A PAPER that would *take about 20 minutes to read* - all in a week's time!!!

(Not to mention keep up with his other classes.)

Do you think he and his classmates were throwing raucous keggers every weekend? Do you think they constituted a public nuisance?

Now this is Massachusetts, and I'm sure the *rowdy off-campus* behavior of today's Holy Cross students has been blown way out of proportion...

But still, if that school wants to sedate its student body, all that's really needed are a few more manly book assignments! 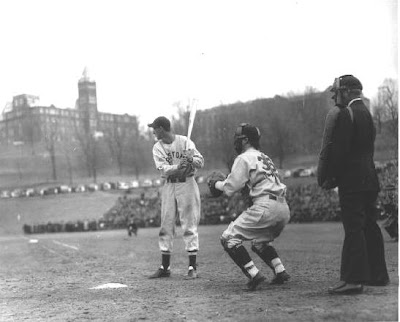 Posted by CaptiousNut at 6:34 PM