Hmmmm.....why is that innocuous comment (and another) I tried to post on Barry Ritholtz's blog this morning awaiting *moderation*???

Is he moderating all comments now, or just mine?

(Turns out, he never let them see the light of day.)

Mr. Ritholtz, author of the most widely read financial blog on planet Earth dropped by MY BLOG and posted a comment. I responded in my customary Captious fashion....

And poof, all of a sudden I was apparently banned from his blog!

I do hope it's not a hard ban.

And if it is, then obviously, I'm going to have to make the baby a dedicated target! 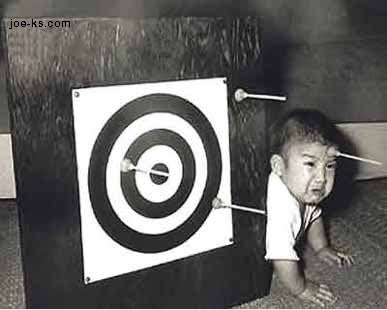 Is it, or is it not pretty darn childish to come onto my blog, attack me, and then ban my innocuous, pertinent comments from one's own site?

Barry Ritholtz We Beg You To Stick To Stocks

Barry Ritholtz Called Me An Idiot
Posted by CaptiousNut at 4:17 PM

Some folks have thin skin in this blogging game. I have never banned anyone, but I have dumped links that went to an utterly personal attack. And I have gotten placed on a moderation list on a local political site that objected to my calling a moron what he is. If someone cannot debate an issue with good humor, they need to be ignored.

That said, Ritholtz is a wimp.

Not for anything....but I heard that you banned some *barefooters*.

No way, my blog welcomes aborigines and dirty, ignorant cretins.

How can you have as Capt points out, the "most widely read financial blog on planet Earth", and have thin skin?
According to BR's Terms of Use & Disclosures: "I will ban anyone whom I choose from posting comments — usually, for a damned good reason, but on rare occasions, for the exact same reason God created the platypus: because I feel like it."
I think its time for Ritholtz to attach - because they are clearly more intelligent and logical than I am.

One of the things that makes my *ban* so funny, so childish...

Is that I only comment on Barry's blog, maybe once or twice a month!

Heck, I don't even read it.

His comment threads used to be good. Then they detiorated, like most large forums do, by *self-selection*.

I read his blog a couple times years ago, more than enough to determine he provides zero actionable information and nothing original or interesting. Plus, on tv he looks like someone shoved a live snake up his a$$.

Still, your banning was reasonable.

That was the joke implicit in my asking him, twice, about Wells Fargo.

He used to occasionally say *short this here* or *I bought this here*.

But since he got exposure and all sorts of new OPM to *manage*, he's gone completely silent. Just a conservative skimmer now - like the rest of them.

I've never seen a specific recommendation on Mish's site either. His *deflationary* thesis remains nothing but hot air. Did he short oil at $80 on its way to $150? Did he short it $35 or $50 after it broke down - and then retraced up to $80? Did he even touch it with a ten foot pole? Who could tell?

In contradistinction, almost every single one of my trades (for better or worse) from the past few years is catalogued on this blog. Though I've been remiss lately, my last four or five small trades haven't yet been posted.

every single one of my trades (for better or worse)--Always for worse,you tanless, carless, houseless MORON.