The Bounty Of Solitude 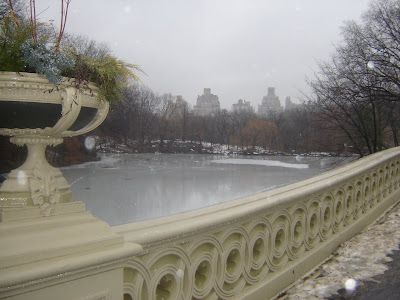 The day after Christmas, at the last minute I decided to take the train from my MIL's house on Long Island into Manhattan - as I excitedly do whenever I get the chance.

Only this time, it wasn't one of my customary 10-hour eating and drinking binges.

No instead I went by myself, even deliberately bookless on the 46 minute train ride. I spent the travel time doing what I always do on this most scenic commute - inhaling the natural beauty of Long Island, of the Sound, and the unnatural beauty of Flushing Meadow, Shea Stadium Citi Field Taxpayer Field, Queens' homes near the tracks, etc.; I generally like to ruminate upon the dizzying variety of New York's economy; and I always, ALWAYS, spend this fascinating ride arguing with myself on whether or not we should move back to the energized NY area. In fact, recently the argument has been getting pretty intense - though this isn't the post for that discussion.

I got off at Penn Station with my umbrella and started walking. I went north through Times Square - and then cut over to Radio City. You see, there's a falafel/gyro truck there that's out-of-this-world. I delightfully consumed my lunch there in the cold drizzle amidst a bevy of very aggressive pigeons.

I found cover, whipped out my Droid phone and googled for the nearest subway station. But then I changed my mind and decided to hoof it all the way up to my destination on 82nd St - the Metropolitan Museum of Art. This was a bit of a self-conscious risk for me, walking so much knowing that I'd be on my feet for hours as well at the marble-floored Museum, given the limitations of my broken back.

Now I hadn't been to the Met since I was maybe 11 or so. My aunt and uncle from Brooklyn used to take us there where I'd be bored and exhausted out of my puerile mind. In fact I probably haven't been to a museum OF ANY KIND since I was in government middle school. I was SO SCARRED from those tortuous experiences that curiosity never had a chance at getting me back to one.

Obviously, I've changed a lot over the past 2 decades; notably I've become a real buff history buff. Halfway through reading Will Durant's tomes, the wheels started spinning in my head and I became very interested in *the arts*. I came to see what I should have been taught way back when - that painting, architecture, sculpture, etc., indeed WERE HISTORY; prior generations didn't have the visual delights of television and photography that we take for granted. The lumpen masses (and potentates) looked to art for inspiration and entertainment. I realized that for me to ignore the portraits, murals, and handcrafts of yore, that would be analogous to future historians trying to study present-day without considering our television shows, movies, YouTube, etc.

Alright enough on my personal intellectual journey. I fully blame *government schools* for turning me against the fine arts - just as others can rightfully blame schools for turning them off math, creativity, or any number of other tragically mishandled subjects.

I must have just beat the crowd at the Museum, because after wandering in the exhibits for a few hours, the lobby had become a complete zoo. The coat-checks were full and a security guard told me that this was *about as busy as it can get*. My solitary chi was then interrupted by a buddy who called at the last minute and wanted to meet up for drink on the West Side.

Like a clueless tourist, I figured that I could just *cut straight across* the park. Apparently the paths aren't so perpendicular. I got disoriented and almost completely lost in the middle before finding my bearings. It was pouring now and the only person I came across was some dude with a huge $9,000 camera or something focused up on the sky - or so I thought. He was actually photographing a large bird high atop a tree. I inquired as to what kind of bird it was, twice in fact before the grumpy invert lisped that it was a *hawk*. Whatever. Guy is probably trying to land some cool pic, blow it up, and sell it to some other loft-decorating invert in Manhattan for $1,000 or so.

Though my shoes and pant legs were now soaked, it was awesome to walk through and see the park completely deserted for the first time. Just as I find empty rainy golf courses sublime....I bet if I lived in NYC I'd also run to Central Park everytime the weather got dicey enough to scare off the riff raff. 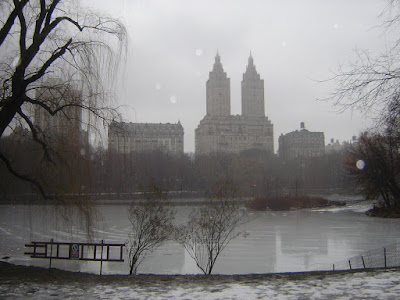 When I finally did meet up with my buddy, he promptly tried to break my stones, "You went to the Museum all day....what, are you turning into some metrosexual or something?"

First of all, that's not what a metrosexual is. Secondly, he was wearing a beret or something!

See what I mean about him *interrupting my solitary chi*?

But it had been a fabulous, relaxing, and intellectually stimulating day.

Fantasies do, or at least SHOULD, evolve over time. No longer do I think about the Boston Celtics winning it all, making a jillion dollars, shooting 8 under par, or that recurring pair of ample-bosomed Asian girls anymore when I close my eyes. Nowadays I'm quite content with a slice of alone time and a mouthwatering gyro - all the better if they can be had in a fascinating place like Manhattan.

I've never really needed an iPod, a book, or a social companion. It'd be impossible for me to ever bore myself. I'm just far too fascinating!

See also - Observations From a NYC Pop-In.
Posted by CaptiousNut at 8:31 PM

If I wasn't making bank in Cali I would be in NYC in a heartbeat. Love the place.

All public schools aren't evil. I grew up and was public schooled in Iowa. Thanks to an extraordinary humanities teacher in high school, I learned the 100 most famous works of art and architectural styles. I knew all about Capes, half-capes and Colonials never having guessed I'd end up surrounded by them (and living in one).

My father just retired after 40 years as a public school teacher and will go on all day about how kids have changed through the years.

It's a combination of family/values breakdown, teachers lacking enthusiasm AND gov't intervention that weakens the system today ( in my opinion ) .

Good for you for homeschooling...it requires great dedication and time committment. I still believe well rounded children can be raised via public schools...but not without support at home.

After extensive and exhaustive research I've come to conclude that indeed all *public schools are evil*.

Have you read John Gatto yet?

Of course that'd only be a start.

Next one would have to man-up and look critically upon their own life.

The rare *success* stories from age-graded factory schools can't compete with the common homeschooling ones.

Remember, I myself was government schooled through 8th grade. And my high school, despite its supposed stature, was also age-graded and burdened with curricular priorities - just like the government schools.