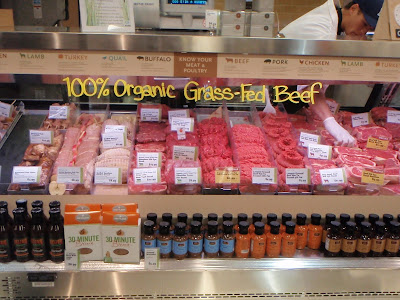 In September, I was at a local farmers market and someone set up a stand to sell their *organic* prime rib. They put out an electric grill(!) and with just salt and pepper turned out one of the most mouthwatering pieces of meat I've ever sampled.

I was really tempted to spend $22 for a sliver of it when I remembered that 1) my wife wouldn't eat it and 2) my kids don't deserve it!

It was really, really good. Yet I didn't think much of it until today.

The catalyst was some meatballs I ate at a homeschooling holiday party. They too were un-freakin' believeable.

I'm hardly shy. I researched and tracked down who made them and essentially asked for a step-by-step recipe.

It wasn't the seasoning of the meatballs - at least I didn't think it was. It had to be the meat composition. They were *lighter* so I definitely had to be tasting some ground pork or veal in there....I was eager to know which, and in what proportion.

Nope. I was told they were all beef. But not just any beef - Whole Foods ground beef.

Now I've never really even been in a Whole Foods, except once for a curious walk-through in Chelsea (NYC). And I've most definitely never knowingly eaten much of their food.

But after my two recent *organic* experiences I'm wondering whether or not there's something to this no-growth-hormone, free-range, whatever the bleep it is that can command such massive price premiums.

Sure, I've heard eco-pagan idiots say that organics *taste better*, but only about one-tenth as much as I've heard them talk about *chemicals* and *global warming*!

You see, I'll certainly pay up for TASTE irregardless of the packaging or within reason, how healthy the foodstuff may or may not be.

I guess I'm the Moron here - allowing the co-option and inarticulation of eco-pagans to have steered me off what could be real culinary delight!

I had built up the SAME INTELLECTUAL RESISTANCE to yoga before going hogwild over it - I pre-judged the sport by the bubbleheads that trumpeted it!

Of course I'm going to have to do some more research on free-range food. I'll be hitting Whole Foods later this week, really for the first time ever....and I'm planning on buying some ground beef.

Hopefully the sticker shock won't be too bad!

For a glimpse into my rookie blogging year, see what I wrote on Whole Foods a whopping 4.5 years ago:

It's kind of common sense, isn't it... if you could eat a piece of meet that was "au natural" vs one injected with steroids, forcefed corn and living in a pen standing up to its shoulders in its own waste... which would you want?

Check out "The Omnivore's Dilemma" for more info! Great book you will enjoy it, learn a lot and luckily not get totally overwhelmed with eco-pagan guilt (the guy is almost libertarian he just doesn't realize he is).

Actually, I find most people who reject some aspect of our fascist-industrial economy that violates property rights hither and thither because it's their pet concern almost inevitably end up taking up a perspective that any consistent libertarian would've arrived at on his own by principle. It's amazing how... natural... libertarianism actually is!

You need to set up a chicken coop in the backyard of your place and accomplish several things at once.

A. Piss off your degenerate landlord.

B. Piss off your masshole neighbors.

All in that order...
Kfell

My buddy built his own chicken coop on an unused lot behind his office and he's raising his own egg-layers there. It's a good side business (he already has subscribed the eggs far in advance of the present production) and he says they're really delicious. He also said it's super fun to watch the chickens interact, they're fairly social with one another.

One more thing, it will teach your kids responsibility...

When I was a little tike, we raised turkeys, geese, and chickens. We collected the eggs and slaughtered the Turkeys for consumption. The geese were more of a nuisance than practical. They were actually more like night watchmen in the barnyard.

I want to build a chicken coop where i live now but the old lady says no and my neighbors would probably balk as well. I guess some towns have passed ordinances against them. Of course when the $^*& hits the fan, all bets are off...
Kfell

"Irregardless is a word that many mistakenly believe to be correct usage in formal style, when in fact it is used chiefly in nonstandard speech or casual writing. Coined in the United States in the early 20th century, it has met with a blizzard of condemnation for being an improper yoking of irrespective and regardless and for the logical absurdity of combining the negative ir- prefix and -less suffix in a single term. Although one might reasonably argue that it is no different from words with redundant affixes like debone and unravel, it has been considered a blunder for decades and will probably continue to be so."

Much better form to use "regardless".

In English speaking countries outside the U.S. it is still generally considered a non word ,used by poorly educated people.

C-Nut drinking the <> Kool Aid. Yes, the meat just tastes better. Watch out when you visit Whole PayCheck. Not all the beef is grass fed. The key is to get 100% grass fed-it's all labeled at the meat counter. It just tastes better, *irregardless* of the health or eco benefit. I am pretty sure that when I drive 20 miles at 13MPG to get to Whole PC I offset any eco benefit that may or may not have been gained by shopping there. If you really want to PO eco crunchies explain that or---nic food generally has a larger carbon footprint than "conventionally" grown food as it typically needs to be transported farther and stored longer. Not the case with farmers markets, but definitely true with the fancy chain stores. The fruits, veggies, eggs, and meats at Whole Foods really do taste better. The bakery is pretty darn good too.

You have made it so you can't post the word o----ic! Hilarious.

I believe I recommended that same book a while ago. Irregardless. It is a good read.

Irregardless is a word that many mistakenly believe to be correct usage in formal style, when in fact it is used chiefly in nonstandard speech or casual writing.

Orthographically speaking, you are correct.

But this blog is written in a *casual*, conversational style.

There'll be no chicken coop. I actually like my neighbors very much. And I like peace and quiet.

Recently I tried to buy some eggs from homeschoolers around here. It's kind of a well-known, easy endeavor.

When my father was a social worker, he'd enter homes in the projects of Worcester and find the cabinet doors ripped off, and birds behind chicken wire.

Imaging having them in your apartment!

Google orthography MORON. Spelling is not the issue.E.B.White challenged MORON.

From Dictionary.com (which I actually consulted BEFORE using the word *orthographically*):

1. the art of writing words with the proper letters, according to accepted usage; correct spelling.
2. the part of language study concerned with letters and spelling.
3. a method of spelling, as by the use of an alphabet or other system of symbols; spelling.

I count spelling in there THREE TIMES - that's good enough from this blog.

And I see now, upon your suggestion, that Wikipedia is disposed towards your Captious pedantry:

While "orthography" colloquially is often used synonymously with spelling, spelling is only part of orthography. Other elements of the field of orthography are hyphenation, capitalization, word breaks and punctuation. Orthography describes or defines the set of symbols (graphemes and diacritics) used, and the rules about how to write these symbols.

Technically, a Moron has an IQ measured between 50 and 69.

I don't think (potentially) wielding a couple of oft-misused words demonstrates that I have an IQ in that range.

However there is no problem here with such license on this informal, *conversational* blog.

Thanks again for keeping me on my toes. I do wish I had an editor. Feel free to correct me anytime.

(Others can take care of the substantive criticism.)

You are still missing the point,which has now shifted from the use of a word which displays grammatical ignorance on your part,to the definition of a word you clearly misused.
Orthography pertains to the spelling of a word,hyphenation, capitalization, word breaks or punctuation,none of which has even the remotest connection to the use of two different and distinct words being "regardless" and "irregardless".
Your continued refusal to yield on this point will make my use of the word MORON all the more appropriate!

Checkmate.
What a surprise! The narcissistic self appointed arbiter of other peoples weaknesses turtles and becomes a mute when the tables are reversed.
Kinda goes with your inability to look at the market whilst your MORONIC short trades were eviscerating your prospects of home ownership.
Maybe your IQ is above 69 and you are technically not a MORON,but you sure are a Loser.

Yep, you guessed it! I'm currently convalescing from those wounds you, whoever you are, inflicted on me.

As for the dream of homeownership....

I must say I know very few people under the age of 65 who actually OWN the roofs over their heads.

All this time I thought tables were *turned* - never heard of them reversing.