Warring With The Weather 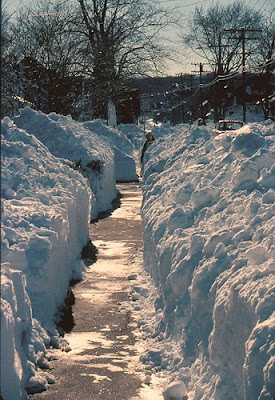 Due to my strict abstinence of all things Big Media....it wasn't until noon yesterday that I even became aware of a forecasted blizzard that was, allegedly, only four hours from commencement!

On the first, third-hand alert I heard *18 inches* of snow.

But at 8:00, when we made my milk, bread, and eggs run to the supermarket (on the way to yet another holiday party!), there wasn't a flake in sight. I checked the forecast again: *4-8 inches....starting after midnight*.

Hah! Alarmism run amok yet again. My cynical thesis was still batting 1.000. How could they have the start of a snowstorm off by 8 freakin' hours, especially when it was only supposedly 4 hours away! And, only 4-8 inches now?

At precisely 11:18pm last night, the first flake fell on my head. And I was looking forward to merely a leisurely snow removal job in morning.

Unfortunately, the storm did hit with a vengeance last night. It's hard to tell exactly how much snow we've got, but it's definitely over a foot - with some ginormous wind-blown drifts. What stinks is that it's not supposed to even stop until noon (so they say). There's so much wind (25 mph gusts), and it's so cold (-4 degrees with the windchill) that I can't even really go out yet and take a bite out of my 6-7 hour snow shoveling job.

Between the meteorologists being, well as far as I'm concerned, wrong all day long, my premature scoffing, and then the eventual nasty blizzard....I feel like I've been whip-sawed - whipped good like I used to get with those massive short gamma (short volatilty) positions in the option trading pit!

Cooking a greasy breakfast, then heading outside. Kids are presently wading through the 2 foot drifts on the deck; it's so cold, they won't last 15 minutes.
Posted by CaptiousNut at 9:48 AM