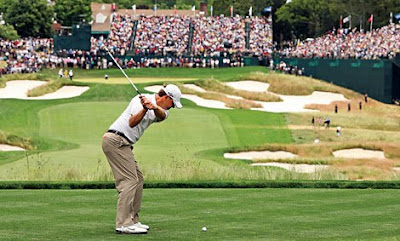 Above find one Lucas Glover - the soft-spoken, expressionless 29 year old who broke out last year winning the 2009 US Open at Bethpage.

He's a good clean-cut American kid from down South - no visible temper, or immaturity, and he hasn't been caught with a dozen skank mistresses a la Tiger!

But when he won the Open this year, he suffered a heap of criticism for not *being emotional enough*. Real golf fans were happy for this upstart American, so why wasn't he?!

Even his reaction to the criticism was worth of criticism. I believe he became indignant.

Now if someone accused me of a lack of personality....my reaction would be pure laughter. But Glover acted like, well, the shoe fit.

Last night on the golf coverage from Kapalua, I un-muted the volume to hear a segment on why profession golfers don't show more personality. Stewart Cink (or was it Nick Faldo?) said that it's part of the game to tame one's emotions, keep an even keel, block everything out, and essentially turn into a robot.

As a serious golfer myself, I do agree with that to a large extent. I really do dislike having to say *good shot* or *thanks* to others when it's directed at me. I don't play in ultra-competitive events with millions of dollars at stake, but if I did, I'd be donning that game-face as best I could as well. 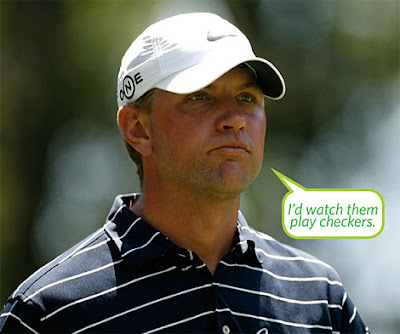 And I also learned something curious and explanatory about the stoic Lucas Glover.

Apparently he's a bit of an introvert; he advertises that he read *over 100* books last year. Obviously, that one every 3.65 days, quite a pace so long as they weren't of the comic or picture variety.

After checking my *books* doc....I see that I myself only read 22 books last year (though one of which was the not-to-be-minimized Bible).

I say good for Lucas, and any other rare bird that exercises their mind to such an extent. In my eyes, there's no wonder why such a focused guy has enjoyed the highest success on the links.

Again, 100 books in a year is pretty impressive.

And I may not even be qualified to carry his clubs...

Reading is good, and MUCH better than inhaling the narcotic of color TV. But it ought to be balanced by composition, IMO.
Posted by CaptiousNut at 9:18 PM