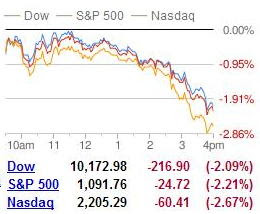 I've only been to a *casino* probably no more than 15 times in my life.

When I do go, all I'll do is hit the wimpy blackjack table, either $5 or $10 minimum, and I sit there quietly, only wagering as little as possible and playing by the percentages.

I know the odds are against me, even if ever so slightly. Also, consider that I've long received my fill of real *gambling* with stocks, options, and futures trading over the past 14+ years.

I prefer to sit there, drink alcoholic beverages, and watch the Morons flail about with their *feeling lucky* step-ups, their emotional gyrations, their cursing of the dealer (and other players), and their stress of financial loss.

As I trade less and less these days, I'm sort of feeling a similar detachment from the stock market. Let everyone else volunteer for that fool's errand of *explaining stock price fluctuations* or even worse *trading them*! At the moment, I'm content to spectate.

Check out what *Sol* from Xtrends did on Friday:

It looks like he came in short the S&P 500 from 1132 and covered nicely around 1103. His p&l says he made $2.5 million on that 7-day trade(s) but that number is meaningless in the sense that we don't know how much of the money is his own, and/or how much may be OPM - that of *Other People*. Atop his positions page (link above) one can readily see that only 1.5 years ago Sol was trading a WHOLE LOT SMALLER.

Then it looks like Sol started nibbling long, playing for a bounce. He got one good flip in there for 390k but the next several were losers; he actually ended up minus $390k on the nibbles. So he gave back a bit (15%?) of his earlier, realized profit. No biggie at all.

I see he also covered what looks to be a month old gold short for $48,000 and a 3-day old successful short of LOGI for $65,688. So in addition to choosing the long side for the day, he was also paring his portfolio of shorts.

Then, his last trade, which was probably late in the day, was a decision to get significantly long the S&P 500 yet again, at 1092, and hold it going into Monday morning.

I watched him a bit last year, before I went into a bear's hibernation. What I like about this Sol, or what I find interesting about him is that he trades somewhat like I do. He's not a day trader; he's a position trader whose infrequency of thoughtful trades I can relate to.

But he definitely, is much better at playing both sides of the tape than I am. I've always had a very difficult time going from *hard short* to *hard long* especially within the same day. 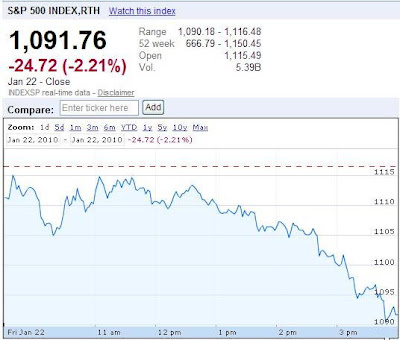 His partner in crime, Atilla Demiray is waxing very bearish (still!). On Friday he wrote:

This type of divergence will lead a very powerful and very sharp sell off that even I may not be able to fully profit from it, despite the fact that I am the one seeing it, living it, breathing it right now. It will start in such a way that will trap the maximum number of traders on the wrong side and leave bears out of the move.

It will start in a way that the initiating move will erase all the cumulative gains one can possibly make trading this silly range during the last 2 months.

I am very confident about all these, but what I am not confident about is the sit tight part I have to do. Once this thing begins, believe me, the best way to profit from it is to shut down your computer and let your short positions stay for 5-10 days because the move will be perpendicular.


I fully expect the market to bounce on Monday; ten months of continuous butt-reaming, dip-buying has conditioned me to expect so.

Though I'll be more relaxed because I have all these out-month puts now.
Posted by CaptiousNut at 11:14 AM

Looks like a thoughtful trader, and he does well.