EVERYONE Should Quit Trading! 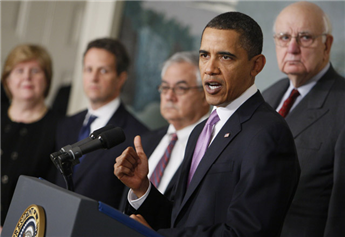 President Obama stepped up the heat on big banks Thursday, saying he would fight to ensure that their "binge of irresponsibility" never happens again.

He proposed limits on banks' size and proprietary trading and said he would work to "rein in excessive abuse that brought down our system."

He said banks "backed by the American people" shouldn't be allowed to own or sponsor hedge funds and private equity funds for their own profit, while putting customers at risk.

About the new proposed rule that'd limit the proprietary trading of banks, the head of the New York Stock Exchange, Duncan Niederaurer said,

....implementation is challenging. As a student of the market I can tell you that it all blurs together...

But he's also a *Former Managing Director of Goldman Sachs*!!!

Supposedly, Goldman trades 20 times as many shares for their own account than they do for their customers.

I have no problem with Goldman gambling its own money; but they shouldn't be brokering trades as well. Doing both entails almost the biggest conflict of interest imaginable.

Look, I'm against most regulation of markets. The fund managers (and their investors) who willingly give their trades to Goldman and get ripped off....they deserve the bad fills and whatnot.

But within a regulated market, it's not hard at all to segregate trading and brokering. Any and all arguments against doing so are specious and fall flat.

I got sidetracked here.

Look, it's not *proprietary trading* that got all these banks in trouble.

It was the gambling implicit in no-money-down, high-priced mortgages in residential AND commercial real estate. And credit cards too!

So yes, FDIC-insured banks probably shouldn't be rolling the dice like Sol.

But selling 20 or 50-1 leveraged homes to José Sixpack has proven far riskier.

Getting back to Obama for a minute. He's right to be slamming the banks - even it he's clueless at the to extent of Big Government culpability in their behavior. They were born of leverage for crying out loud, with their fractional-reserve sanction, FDIC insurance, and whatnot.

You see while Obama inveighs against banker's "binge of irresponsibility"....

Not only will this anti-trading rhetoric do nothing to lower the risk profile of Bank of America, JP Morgan, Wells Fargo, Citigroup, et al,....we're still left with very little to combat the *binge of irresponsibility* from politicians. Consider the hypocritical irony of Barney Frank, serial apologist for Fannie, Freddie, and subprime lending, up there next to the podium. What a farce!
Posted by CaptiousNut at 5:01 PM

I'm afraid obama disagrees with you. The way he understands, its the fat cats that did the high-leveraged gambling with other people's money putting the bringing the whole financial system to brink of collapse (atleast indirectly).

Well, it does seem like that from outside when u had to bailout most of those firms with taxpayer dollars.

And, add the obscene Bonus and "doing god's work" arrogance.

Here's my point, you cant blame jose sixpack he is not a money/finance/risk expert, and like any joe-sixpack he will get what he can get.

I put the blame on high-leverage gambling and bonus incentives to abandon risk (with sophisticated quant models that are just mind circle jerking).

I dont have problem any company(anybody) gambling their money as long as it does not affect the whole damn country - not only bailout in money but also its impact on interest-rates(credit ratings), depression symptoms, market confidence (most important factor that determines the how easy to get credit for small business etc), moral hazard bullshit etc.

First of all, I'm sure Obama doesn't understand the banks at all. Almost no politician does - and even few within the realm of finance actually have a clue.

Secondly, if I read you correctly, you lean towards blaming the fat cats more than Jose 6Pack.

That's a calculation that I find to be *not important*, but also one I'm unfit to make.

The system, with pervasive government involvement, was inherently a ripe breeding ground for fraud on every level.

I reiterate. The government did not have to bailout these companies. It could have just made them raise capital and dilute their current stakeholders out of existence.

"government did not have to bailout these companies. It could have just made them raise capital and dilute their current stakeholders out of existence"

c-nut, obviously its not as easy as you make it out to be. There are funding/credit problems that you cant afford to have if u let the whole thing to delerage at once (= sudden drop in market confidenc, very high unemployment). We are looking at potential bankruptcy of entire cities or states - maybe riots in extreme case. I agree it is actually the right thing todo even if it means short term pain.

But as you said, politicians(most of them) have no clue about the intricacies of capital markets. And you have former GS/other-wall-st folks(who were part of the problem) devising solutions for it. As much as you want to blame it on "big gov", i believe its actually, again, fatcats (former?) to blame.

Its not that i want to put blame on somebody; the way i look at it, what is the source of the problem (who facilitates or the origin). what can we do efficiently/quickly that can actually reverse/change the past failed practices? you cant expect jose sixpack(probably HS dropout) to learn his lessons and navigate his credit/debt needs immediately. It will take bankruptcy or two for him to learn to be prudent. On the other hand, you have IvyLeague(mostly?) educated financial/risk/banking experts who know (hoping) everything about money/capital-markets - and who are incentivized by obscene bonus to use their smarts to game the system.

So you fix the system(== prudent regulation and its actual implementation. enforcement has been a big problem all along, it needs to be strengthened)

I dont think Big Gov, your favorite blame, has much to do with recent financial crisis. I bet we would have seen same (for eg: subprime debacle) even if we had small .gov.

Regarding Big Gov, I totally agree with you on its evils and inefficiences. I am all for as small a .gov as possible. Free Market Rules.