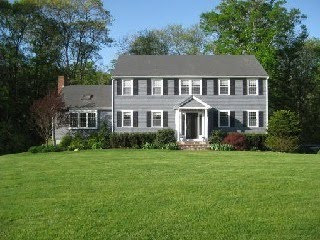 It started last year somewhere north of $800,000 - either 825k or 850k. I can't remember. My wife checked it out and really liked it, notwithstanding the price of course.

I've seen that nonsense a few times on Coldwell Banker properties. Why exactly would any Moron bid over $700,000 given that stipulation. (My wife and I have mind to bid them 595k!)

Let's see, the house has been sitting there since last year....so I'm not sure *entertain* is a well-chosen verb either. They must be pissed; I've seen plenty of worse looking homes sell, at higher relative prices to boot(!), in this region during the knife-catching, low-interest-rate-mirage, year of 2009. It's probably one of these situations where the house has been just a little (50k?) over-priced, the whole way down. Much like that one we bid on!

Another hypothesis, of which I'm skeptical, is that maybe all the potential buyers somehow found out that this house will be in the shadow of a soon-to-be-built, ginormous, eco-pagan windmill?

Yes indeed. The locals were vociferous, and evenly-split on the issue - at least until the dark side called a *midnight meeting* during a quiet summer week....and rammed the controversial proposal through.

One interesting thing about that battle was that, supposedly (because I won't get personally involved in this crap), there was a strict age divide. All the 'old coots' and 'old bags' in town were FOR a spinning, symbolic waste of tax dollars. And standing opposed were the younger families - the people who hadn't been voting for Ted Kennedy for the past 46 years.
Posted by CaptiousNut at 4:15 PM

That "entertain offers" in a "value range" cack started 6 or 8 years ago and is still vomit inducing.

Are you a RE broker or something?

You *time-lined* that range with such precision...it just got me wondering.

that wind turbine is going to be so beautiful, i can't wait to make $80,000 per year off it and not see it from my home in the next town north!