Here's how the index performed these past five days: 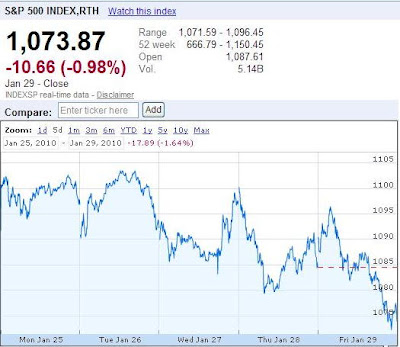 And here are his reported trades for the week: 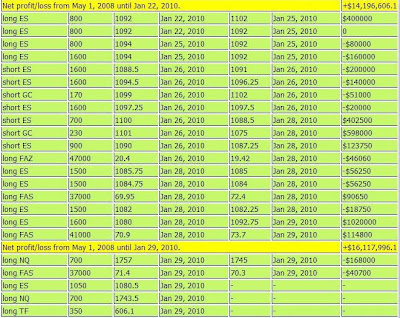 So it looks like Sol was able to scalp the long he carried over the weekend, making ten point on half of his position and breaking even on the other half - for a net profit of $400,000 on Monday.

Then it looks like he gave it back in the next two days - losing on two more attempts at going long, losing on three attempts to short the S&P, and he lost at bit, 51k, trying to whack gold.

His luck then turned, winning with a market short and a gold short, and then later, on Thur-Friday with a big scalp on the long side. Not counting his last few trades, the numbers show almost a $2 million profit for the week. Not bad, right?

Well, maybe it's not as good as it seems.

You see, a 1,600 long futures position, what Sol came into the week with, represents:

Sure, I undertand that margin is 10% for futures, and therefore Sol's account might only have $8.7 million in it.

In that case, yeah, a $2 million weekly profit off a base account of 8-10 million would indeed represent some spectacular returns.

But it would also represent substantial risk - something no one has to explain to me, a veteran profit-eraser!

I highly doubt that Sol only as $10 million in his account. I'd wager that he has at least $20 million; and that it's not all his. (Though I could be wrong, of course.) I just think some numerical perspective is warranted before anyone anoints this guy a *great trader* - because turning $80 million into $82 million, even in a week, don't mean squat!

After giving back 200k of his profits on Friday, Sol is coming in, what seems to be, seriously long yet again this Monday. He held *overnights* in the S&P 500, the NASDAQ-100, and the RUSSELL-2,000 representing, yet again:

Now don't get me wrong, I respect anyone who's got the stones to publicize their trades - even if on a somewhat delayed basis.

One thing's for sure, Sol's got more balls (and brains?) than I do. I could never bring myself to come in that long in THIS MARKET.

Good luck to him. May he get out of his long before the market moves *my way*.
Posted by CaptiousNut at 1:36 PM

At the very least, the guys got stones.