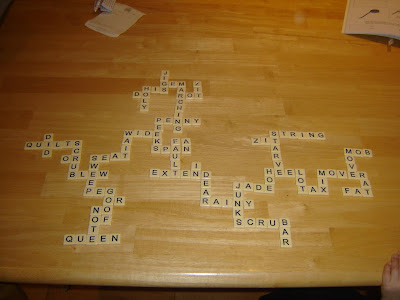 In - More On Bananagrams - I extolled the game as a competitive, multi-player pastime.

But what also makes it truly great is that it's a compelling *solitaire*.

Start with 21 tiles, and only peel (grab another from the pile) when necessary....until you use all 144.

That's what the directions tell you to do. Although I started doing it my way - grabbing four additional tiles whenever I completed a crossword. I've done it five times now and haven't yet had to raid the pile!

AND an even more important discovery was how great this solitary game has already proven for my son. I do it at the kitchen table while he's eating and effectively pique his attention. I make him grab the new tiles and form partial words. For example, say he grabs G,I,L,A....I make him re-arrange them, he forms -AIL, I make him propose *-AIL* words *MAIL, RAIL, SAIL, TAIL, FAIL,...", then he has to look for a useful, open consonant on the crossword.

It's just like what I've been doing with Big Boggle in terms of phonics, spelling, and vocab expansion, except that it's so much mo' better!

So as far as phonics is concerned....we've gone from Kumon books and typing out rhyming words on the computer, to SpellQuizzer - which didn't last long, then utilized Big Boggle for the last couple of months....

But Bananagrams beats them all by a mile.

I've even got my 3.59 year-old Princess EAGERLY spelling her words out with tiles on the kitchen table!

Another Approach To Boring Phonics.

SpellQuizzer
Posted by CaptiousNut at 10:56 PM

Oh that is fantastic! Very well done indeed! Wish I had the patience to do that, its something one would do if they were snowed in