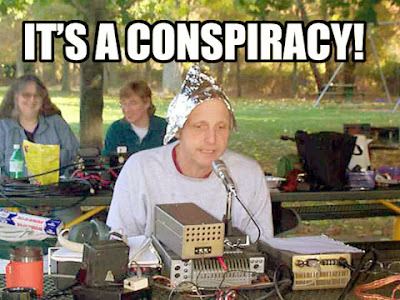 This stuff is great. And it'll really get an open-minded person thinking:

HIV does NOT cause AIDS. HIV does not cause anything. A staggering statement given the hype and acceptance by the scientific establishment and, through them, the public that the HIV virus is the only cause of AIDS. HIV is a weak virus and does not dismantle the immune system. Nor is AIDS passed on sexually.

There are two main types of virus. Using the airplane analogy, you could call one of these virus strains a "pilot" virus. It can change the nature of a cell and steer it into disease. This usually happens very quickly after the virus takes hold. Then there is the "passenger" virus which lives off the cell, goes along for the ride, but never affects the cell to the extent that it causes disease.

HIV is a passenger virus!

So how on earth did it become the big boogy man virus of the world? The person who announced that HIV caused AIDS was an American, Doctor Robert Gallo. He has since been accused of professional misconduct, his test has been exposed as fraudulent, and two of his laboratory executives have been convicted of criminal offenses. Tens of millions of people are tested for HIV antibodies every year and Dr Gallo, who patented his "test", gets a royalty for every one.

Luc Montagnier, Gallo's partner in the HIV-causes-AIDS theory, has since admitted in 1989: "HIV is not capable of causing the destruction of the immune system which is seen in people with AIDS". Nearly 500 scientists across the world agree with him. So does Dr Robert E Wilner, author of the book 'The Deadly Deception. The Proof That Sex And HIV Absolutely Do Not Cause AIDS'.

Dr Wilner even injected himself with the HIV virus on a television chat show in Spain to support his claims. Other doctors and authors come to the same conclusions, among them Peter Duesberg PhD and John Yiamouyiannis PhD, in their book, 'AIDS: The Good News Is That HIV Doesn't Cause It. The Bad News Is "Recreational Drugs" And Medical Treatments Like AZT Do'. That's a long title, but it sums up the situation. People are dying of AIDS because of the treatments used to "treat" AIDS! It works like this.

Now it is accepted by the establishment and the people that HIV causes AIDS, the system has built this myth into its whole diagnosis and "treatment". You go to the doctor and you are told your HIV test was positive(positive only for the HIV antibodies, by the way, they don't actually test for the virus itself). Because of the propaganda, many people already begin to die emotionally and mentally when they are told they are HIV positive. They have been conditioned to believe that death is inevitable.

The fear of death leads them to accept, often demand, the hyped-up "treatments" which are supposed to stop AIDS occurring. (They don't.) The most famous is AZT, produced by the Wellcome organisation, owned, wait for it, by the Rockefellers, one of the key manipulating families in the New World Order.

AZT was developed as an anti-cancer drug to be used in chemotherapy, but it was found to be too toxic even for that! AZT's effect in the "treatment" of cancer was to kill cells - simple as that - not just to kill cancer cells , but to kill cells, cancerous and healthy. The question, and this is accepted even by the medical establishment, was: would AZT kill the cancer cells before it had killed so many healthy cells that it killed the body? This is the drug used to "treat" HIV. What is its effect?

It destroys the immune system, so it is CAUSING AIDS. People are dying from the treatment, not the HIV. AIDS is simply the breakdown of the immune system, for which there are endless causes, none of them passed on through sex. That's another con which has made a fortune for condom manufacturers and created enormous fear around the expression of our sexuality and the release and expansion of our creative force.

Many deaths incorrectly attributed to AIDS
What has happened since the Great AIDS Con is that now anyone who dies from a diminished immune system is said to have died of the all encompassing term, AIDS. It is even built into the diagnosis. If you are HIV positive and you die of tuberculosis, pneumonia, or 25 other unrelated diseases now connected by the con men to "AIDS", you are diagnosed as dying of AIDS. If you are not HIV positive and you die of one of those diseases you are diagnosed as dying of that disease, not AIDS. This manipulates the figures every day to indicate that only HIV positives die of AIDS.

This is a lie.

Many people who die from AIDS are not HIV positive and the reason that the figures for AIDS deaths have not soared as predicted is that the overwhelming majority of people diagnosed HIV positive have never developed AIDS. Why?

Because HIV has nothing whatsoever to do with AIDS.

Anything that breaks down the immune system causes AIDS and that includes so-called recreational drugs. The vast majority of AIDS deaths in the United States involve homosexuals and this perpetuates the myth that it has something to do with sex. But homosexuals in the US are among the biggest users of drugs which genuine doctors have linked to AIDS. Prostitutes who take drugs often get AIDS, prostitutes who do not take drugs invariably do not get AIDS.

The rise in the AIDS figures in the United States corresponds perfectly with the increase in the use of drugs - most of which are made available to people on the streets by elements within the US Government, including Bill Clinton and George Bush. In Africa, the breakdown of the immune system, now known as AIDS, is caused by ill health - lack of good food, clean water and the general effects of poverty. Haemophiliacs do not die from HIV-infected blood, they die, as they did before the AIDS scam, from a quirk in their own immune system. Their immune system locks into foreign proteins in the infused blood and on rare occasions it can become confused during this process and attack itself. Their immune system, in effect, commits suicide. HIV is irrelevant to that.

Yet how many people today who have been diagnosed HIV positive are having their lives blighted by the fear that the symptoms of AIDS will start any moment?
AZT is the killer. There is not a single case of AZT reversing the symptoms of AIDS. How can it? It's causing them, for goodness sake. The AIDS industry is now worth billions of pounds a year and makes an unimaginable fortune for the drug industry controlled by the Rockefellers and the rest of the Global Elite.

I saw article on my new favorite website Natural News today. Apparently it's the work of one David Icke, an alleged grandmaster of *conspiracy theories* - in league with that Alex Jones guy I once highlighted.

I'm generally unmoved by the whole, oft-heard *crazy* accusation. Every single one of us you is NUTS about many things, minimally.

In his State of the Union address in January 2003, President Bush announced the creation of PEPFAR, the President’s Emergency Plan for AIDS Relief, a commitment to significantly increase US spending on HIV/AIDS initiatives around the world.6 Planned to run for five years, PEPFAR intended to direct US$15 billion to places where it is most needed. PEPFAR was renewed in July 2008 with the intention of spending $48 billion from 2009 to 2013 on programmes to tackle HIV and AIDS as well as tuberculosis and malaria.

That's almost $9 billion per year....$9 billion in welfare for Big Science. Naaaaahhhhhh....there's no fraud on that gravy train!

Obviously, the government has no business being in the *disease business*. If I were President dictator, I'd chop that number to ZERO in a heartbeat.

(And, of course, I'd eliminate every penny of research subsidies to universities and colleges!)

So go ahead and scoff at *conspiracy theorists*...

I'll bet AGAINST Big Government on everything, every time with the comfort that empiricism, i.e. the only science, is on my side.

See also my recent post - On AID$.
Posted by CaptiousNut at 8:35 PM

So..would you inject your children with HIV just to test the theory?