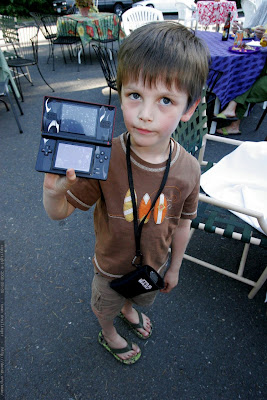 He may, but I certainly don't!

Some of his age-peers have them now. Their parents let the kids bring them to the playground and to the library....you know, places where they are supposed to be *socializing* and whatnot. Obviously, the Nintendo is for *mom* as much as it is for the kid. It's a freakin' sedative!

Even my kids' female cousins have these game consoles. My crazy SIL, their aunt, said to them over Christmas, "What, you guys don't have DS's???" - as if WE were the weirdos!

Since when did little girls get into video games?

And I may have mentioned this before, but my cousin, whose kids are a tad older than the Prince, she told me that when her sons go on *playdates*....that all they do is sit around and play each other's video games!

Look, the Nintendos are the worst thing in the world. But the brats just can't be bringing everywhere; they can't be their chief form of amusement.

I occasionally let my son play Galaga, Asteroids, River Raid, and Spy Hunter on my computer....BUT only after he gets his *work* done. And definitely NEVER when there are visitors here.

As for his friends who are addicted to video games and color TV....they'll be categorically screened out.
Posted by CaptiousNut at 8:36 PM

I got my daughter one of these things because all her cousins have them.

For the first day and a half she enjoyed it. It has pretty much gathered dust since then.

I don't get how kids can be so addicted to the thing when 90 percent of the games are based on the same boring premise--some character runs around collecting coins. It might be Mario. It might be a monkey, or Cinderella or Sponge Bob, but the games are all basically the same...

Oh, and if you are talking about Zombies, forget about the DS. Lets talk about cell phones and texting. Have you taken a look at a group of teens at the movie theater lately?

How about adults at the bar - with their cell phones!?

Nothing wrong with a DS...they are great for plane rides. I'm with Justin Time...my daughter paid attention to it at first and now uses it only when travelling via air (I make her look out the window on road trips).

You're the parent. You control it.