Was Bound To Happen 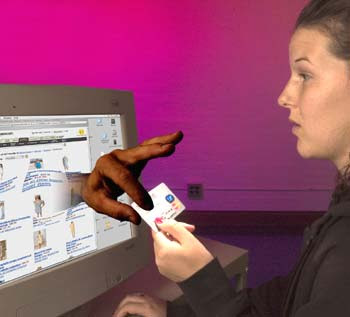 My MIL won't give her credit card number over the internet; instead I believe she *calls* and will only do so over the phone.

And I have a jurassic aunt who won't even give out her card info over the phone!

Why not? Well, for the fear of so-called *identity theft*.

Some time back I once mocked my aunt, telling her that she flatters herself, "...no one would ever really want TO BE YOU!"

So today I'm at Chipotle for lunch with my first wife and two children - when my credit card was declined.

Right away, I looked at Mrs. C-Nut with accusatory eyes and presumed that she had been late to pay the bill, yet again. Because that's what they're doing now, miss one payment and they shut you off. See my - Personal Credit Crisis - from this past summer.

But my wife insisted the bill was paid. Figuring this may be somewhat important, I put down my quarter-eaten burrito and endured the painful process of calling my credit card company (BoA/MBNA). Apparently, there was a fraud alert that was set off. The dude asked me if I charged $1 at Apple.com. I most certainly did not. And then he asked me about a $600 purchase at hocks.com or something (I couldn't make out the name of the website amidst the din of the restaurant). That sounded fishy to me - and my wife didn't know what it could possible be. But the customer service rep was pretty certain it represented foul play. The $1 charge at Apple.com was a test or something to see if the card worked, so he declared. Right away he said they were turning off the card, issuing me a new one, and mailing me some affidavit.

So what happens next? My wife thinks it's my landlord, but it most certainly is not. It's probably some waiter or bartender who ran the card some time ago. They wrote down the numbers and then later googled for my address. Or maybe not? I really don't know. I would like to know where they tried to ship the merchandise too. That would be telling, would it not? I mean, they could probably ship the stuff there and then handcuff whomever tries to take it home pretty easily, right?

But they won't do that and therein lies the problem. These clowns don't think it worth their time to chase down what they think are *small crooks*, so they just bake the fraud losses into higher prices for the rest of us. 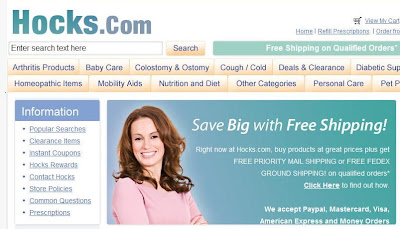 It looks like hocks.com is some medical/pharmaceutical retailer. I just called them directly and left a message. I can understand why Bank of America/MBNA might not want to even help me track down the thief. After all, they just take back the funds they were going to wire over and wash their hands of the matter; but I'd presume that hocks.com would be more interested in nabbing the crook, a guy/gal who's just going to try the exact same scam again, and again.

I'd be really surprised if they actually did anything in the way of helping me or law enforcement, and that will either be confirmed or denied next week.

In the meantime, I guess I have to run a credit check or something to make sure no one has opened cards in my name. I don't really know. Have any of y'all been victimized thusly? Any advice?

So what exactly was *bound to happen*?

Well, that someone would officially want to steal MY IDENTITY and be me!

Lastly, my MIL, the one who's chauvinistic about *not giving out her credit card number* online...

She was boasting of her precaution a couple of weeks ago when my wife interrupted and retorted:

Whether it's driving too fast, eating poorly, fake-n-baking, mortgaging too much, clicking on pop-ups, or making ill-timed ETF purchases....we all have some risky habit or another!

Other pertinent reading I just came across:

Here is an interesting article about crooks stealing ATM cards and PINs.

And here is another on gift card scam artists.
Posted by CaptiousNut at 2:29 PM

Between me, my wife, my kids, and my employees, this happens constantly. No big deal. I mean, I'm sure it CAN be a big deal of the sort you read about where people's lives are turned upside down, but all of my many experiences with hijacked card numbers is that they issue you a new card and that's the end of it.

Nobody is going to stake out a PO box in Nigeria to handcuff the guy who bought your cc number for $5 and ordered the merch.

It's a modern day non-event.

That's where hocks.com was lined up to ship to.

Just talked to the woman from the website, somebody tried 57 different credit cards that day!

As expected, she told me it was *bank of america's problem*. Only if she had sent the merchandise would her company care. So the scam artist is, of course, going to skate, and continue in this line of *work*.

Yeah that's pretty typical the last few years - a US drop addy before sending merch on to east europe or africa. Or it could be NC white trash with a mullet trying out the card numbers he bought for $5 apiece on the internet and using his own addy!

I had my Amex hijacked after traveling to Toronto for business. I've heard they can install something on swipe machines where it captures the numbers on all cards that swipe. I'm guessing it was the Toronto airport or Logan.

Someone charged a phat living room set to the tune of almost 7k from some furniture store in Canada...

In addition to the Amex, I've had my Citi debit card hijacked twice and once when I banked at Chase. Maybe I need to switch to Hingham Savings & Trust...certainly they aren't as much of a target...

ps in all cases the $ was returned to my account within hours by the bank pending investigation which always was in my favor.

The penultimate link in the post discusses those things they attach to the scanners to rob numbers.