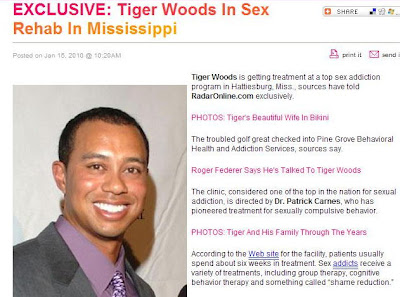 Since the term was coined in 1983, "s*x addiction" has become so embroidered in our self-help vocabulary that most of us stopped questioning it. The term gets bandied about whenever Bill Clinton logs extracurricular time with an intern or Eliot Spitzer gets caught having s*x in his socks or David Duchovny separates from his wife. Recently "S*x Rehab" host Dr. Drew Pinsky made headlines by suggesting that Tiger Woods has a s*x addiction. It's become the go-to defense for extramarital affairs (I'm not an a$$hole; I'm an addict!) and been sold to "Oprah" viewers eager to diagnose their p0rn-loving husbands as both addicts and assholes.

Wow. That has to be a record for ellipses on a single MM blog post. Sorry, but I've got to keep my content flowing through all those *adult content* filters - we live in a veritable THEOCRACY!

But getting back to Tiger...

Obviously, the guy is in a world of hurt at the moment. He's embarrassed himself, destroyed his family, and in all likelihood halved his net-worth. Golf is an intensely psychological game even when one has all their chicks ducks in a row(s) - but now it's got to be more difficult than ever for him to concentrate on the micromanagement of his swing. And how's he going to react in the heat of major when some yahoo yells "CHEATER!", "NICE SHOT TAG-ER!", or something at him?

PLUS, with the paparazzi hounding every one (12 15?) of his broads, especially that tart (Rachel?) that he pitifully connected with, it just can't be easy for him to operate and indulge in his favorite pastime. He's got to be positively brimming at the moment!

And that reminds me of my South Philly, golfing GutterBuddies.

One such jabroni, trying to deprecate the 20 yards behind me he was after each and every tee shot...

There's a free C-Nut bobblehead doll for the first one of you clowns to accurately fill in the blanks! 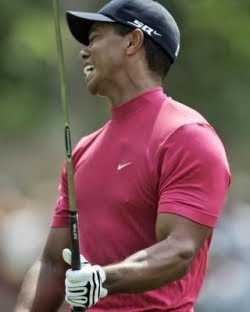 Could Tiger's arms even get any bigger?

I know, as a crude hypothesis test, I'll be watching closely for any jump in Tiger's driving stats this year. In 2009, he averaged 298 yards with the 1-wood.
Posted by CaptiousNut at 6:51 PM

just few weeks back they were saying Tiger is in rehab in Phoenix or AZ somewhere. now this? which is true.

i guess they just create these to divert attention.

The hoors he kept were beyond skank.

Though not as bad as the ones on that HBO show - Cathouse!

True, but hella skankier than dozens of Amsterdam window girls who go for $50 a pop.

Never been to Amsterdam.

My worst *experience* was in the dancing joints of Baltimore. HBO's The Wire was most definitely whitewashed for popular consumption!