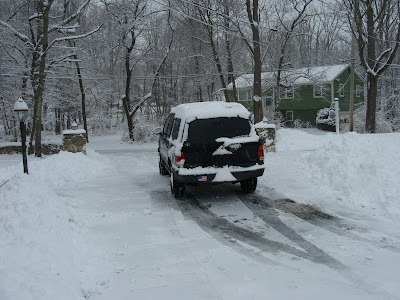 So we're down to one clunker!

The above nine-year old Ford Explorer was sold late last night to a self-described *flipper*.

Well, the phone rang off the hook. And I couldn't even recognize most of the area codes. One guy from Philly wanted to buy it, obviously sight unseen. He said he'd wire the money, ON NEW YEAR'S DAY! "But, the banks are even open," my wife pointed out. He said that, "The supermarkets were," and that he'd send the money muy pronto. It seemed like a scam, plus there were plenty of locals interested, so we blew him off. I even (may have) yelled at my wife the phone rang so much.

One determined fellow, overcame poor cell reception, a daunting language barrier, and managed to drive to our house late last night on icy roads from a good hour away.

In the pitch black, and with only a tiny flashlight he inspected the car, revved the sputtering engine several times, and said, "Sold. Will you take $1,100". Of course I would - if for no reason other than to stop the phone from ringing!

During the rapid sales process, even before he said he'd buy it, I tried to communicate some of the idiosyncratic flaws of the vehicle. But he cut me off. In his broken Hispanic accent:

ElFlipper - I be honest with you....I just flip car....I send to Mexico where they can fix for cheap.

Inside GMAC's house, we signed the title over to this most polite hombre and he emptied his wallet right in front of us.

ElFlipper - Would you take a check for $15? (in perfect English!)

Of course I wouldn't. Depositing a tiny check is a massive pain in the butt. ¡Feliz Navidad!, again hombre. (Though I am sure he had more cash in his pockets!)

Given the volume of interest in the clunker, and given the confession of the flipper, clearly we underpriced the car.

But how would this flipper make any coin? A transmission costs $2,000, doesn't it? How much of that really is labor whose expense could be mitigated thousands of miles away in Mexico? Plus, he had to get it towed and he had to ship it there. That had to cost a few hundred bucks, I would presume. NOT TO MENTION, that all of my research (see first link above) told me that these mierda Ford Explorers couldn't even be righted by a brand new transmission.

Of course El Flipper doesn't care. His excitement was not at all well-concealed. He was surely going to make a couple or few hundred dollares just by putting it on a truck to Mexico. And you know what? The hustler deserved every penny of it as far as I was concerned.

Though I do wonder how fast those trabajadores will peel that bumper sticker off...

Yes, You Can Drive A Clunker

Trade Down To A Clunker
Posted by CaptiousNut at 5:43 PM

Email ThisBlogThis!Share to TwitterShare to FacebookShare to Pinterest
Labels: cars