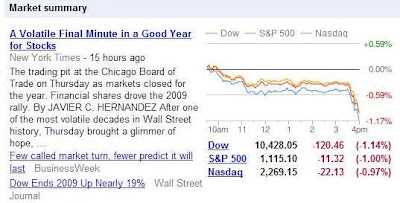 Normally, a year of losses following a year of sizable *unrealized* gains would be easy to tax manage.

Except this year, I made a bunch of dough through March. See - Knocking The Ball Coverless! and An Aggressive Flattening - for *nostalgia*.

So this year was poised to turn out with a lot of realized capital gains and unrealized losses, again - at least until this past week when I rejiggered my portfolio.

I had to decide which losing positions to kill, and whether or not to re-build them in like instruments.

I've thought a lot about those levered ETFs over the past year and I still maintain that mathematically illiterate people have somewhat over-rated their decay. The problem wasn't decay so much as it was Bank of America going from 2.50 to near 20.00, Wells Fargo tripling, Goldman more than doubling, etc. Simple math said a 3X levered short would spiral to zero, and it did.

But for the moment, I am only shorting banks and REITs via long-dated puts. The high stock prices combined with relatively low premiums make this a no-brainer - at least versus dealing with the imperfection of leveraged ETFs. There's plenty of leverage in these bets, and I don't have to worry about path-dependency and some of the political risk of the ETFs. Click the first link above to see the outsized gains I made with out-month puts on Wells Fargo last year. And then contemplate the risk/reward profiles of today's banks' option prices for yourselves.

Here are my significant current positions in descending order of magnitude:

I've had some real extended trading woes over my 14 year career - but the past nine months rank up there with the worst of them.

Meanwhile, everything else in my life is blazing on all cylinders. So who the eff am I to complain? Life is darn good; and there's far more to it than money - even if I spent almost all of my life thinking(?) otherwise.

Though obviously, I am still hoping, and betting(!), that the *magazine jinx* is still regnant!

Click graphic to enlarge.
Posted by CaptiousNut at 8:32 PM

Good to see you're back in action...trading wise at least. And before I forget, Happy New Year you Manlover!