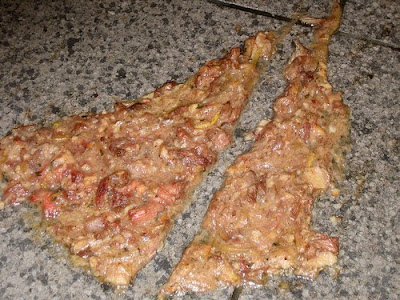 So last night I was out at some type of informal dinner party thing - a typical suburban couples thing.

Late into it, I was sitting there in the kitchen lecturing some guy on *self-denial*.

I gave him the example of how when I eat ice cream now, I only take two-thirds of what used to be my normal-sized portion. I most definitely had the gentleman's rapt attention.

For a second example I told him how I was going to go all year without eating pizza.

Mrs. C-Nut - HAH! You had pizza for lunch today.

Mrs. C-Nut - You had those two pieces for lunch TODAY!

"Crap," I thought. I did in fact eat two leftover pieces from my wife's dinner last night for lunch. WTBleep!

Mrs. C-Nut - YOU DIDN'T EVEN MAKE IT THROUGH JANUARY WITHOUT PIZZA!!!

[Yes, she was killing herself with laughter. Consider that it's very rare for scoffers to have the chance to unload on me like that.]

Now I was still stunned, and very upset. At Papa Gino's and the other pizza joints, all month long I had been getting sandwiches while my kids ate pepperoni pizza. But going to some fancy restaurant the night before, that was like a sneak attack on my consciousness. My wife ordered some less-than-masculine, wood-fired, pie with red onions, SWEET sausage, and goat cheese. I actually sampled it Friday night in addition to consuming the leftovers on Saturday.

It was bad enough that I broke my 2010 *resolution* so early - but to do so with that yuppified, broad-flavored pizza??? That realization really pissed me off.

And then guess what....this morning, in my REM sleep, I remembered that not only did I eat pizza on Friday night and Saturday afternoon...

But I also ATE PIZZA on my lunch date Friday afternoon with that castrato friend of mine. We dined at Pizzeria Uno and ordered a friggin deep dish - AT MY BEHEST!

For background, see - Sick Of Pizza.

Y'all realize that ain't (necessarily) pizza pictured above, right?
Posted by CaptiousNut at 8:47 PM

Email ThisBlogThis!Share to TwitterShare to FacebookShare to Pinterest
Labels: food

There is a reason Uno is in financial doo-doo...their pizza sucks! Embrace yuppified pizza, why deny that it tastes good? Papa Gino's is only a step above chuck e cheese. You live in Hingham and let's face it...there is no good 'real' pizza within 20 miles. Do try the grilled pizza at Al Forno in Providence. The Mrs will love it and as much as you may loathe to admit it, so will you.

Look, I don't dislike the yuppy pizza - it's just not in league with a greasy, cheesy pie from the right local joint. Plus, isn't it something like $22 for a pizza from Upper Crust?

You don't know what bad pizza is, unless you've lived in Philly or Charlotte like I have! (Of course, I've lived in NY too - home of the best!)

Pizza Hut isn't bad. I wish they'd bring back that really thick pie they had when I was a kid. I think it was called the Priazzo or something.

All this pizza talk is whetting my appetite. Maybe I'll try that Al Forno pizza place in 2011, when my resolution expires.