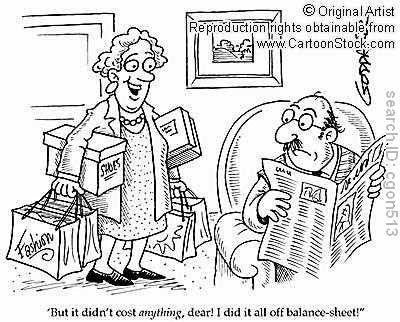 It's well known among us few perspicacious minds that all of the banks are insolvent.

Their *earnings* reports are pure flights of fancy. They simply make up numbers that have no relation to economic reality - all condoned by an econo-illiterate, incumbent Big Goverment. Remember those empty-skulled pols *relaxed* mark-to-market accounting in 2009.

For quite some time now, the big banks have buried toxic loans in so-called off-balance sheet entities. But this crime is in the process of being reined in. These banks will soon be obligated to *consolidate* their books. Read how they are responding to that impending reality:

Banks should be given three years to raise capital for offsetting assets and liabilities that must be brought onto their balance sheets, Citigroup Chief Financial Officer John Gerspach said yesterday in a letter to regulators. Requiring banks to "assume the risk-based capital effects immediately, or even over one year, is an undeniably severe penalty," he wrote.

Regulators including the Federal Reserve and the Federal Deposit Insurance Corp. sought comments on whether to permit a "phase-in" of capital requirements rising under a change approved by the Financial Accounting Standards Board. The rule passed in May eliminates off-balance-sheet trusts known as Qualifying Special Purpose Entities, forcing banks to move billions of dollars of assets and liabilities onto their books.

The capital requirements "will have a significant and negative impact on the amount of consumer-conduit funding that will be made available by U.S. banks," said the letter from JPMorgan, the New York-based bank that this week reported its biggest quarterly profit since the subprime-mortgage market collapsed in 2007.

"We strongly support a phase-in period for the rule changes," according to JPMorgan’s letter, which was signed by Managing Director Adam Gilbert. The change would take effect for annual reports after Nov. 15.

The rule "could lead to the result that every $1 billion of additional capital held from newly consolidated assets ‘crowds out’ more than $15 billion in loans," Paul Ackerman, Wells Fargo’s treasurer, wrote in a letter yesterday to the Fed, FDIC, Office of the Comptroller of the Currency and Office of Thrift Supervision. The comment period ended yesterday.

"That sort of information will get the attention of politicians, if not the regulators," said Robert Willens, a former managing director at Lehman Brothers Holdings Inc., who now runs his own tax and accounting advisory firm in New York.

Citigroup, the New York-based bank that yesterday reported a third-quarter profit of $101 million, argued that bringing off-balance vehicles onto its books would lead the bank to cut financing for securitizations that fuel credit-card lending, residential mortgages and student loans. Additional consumer loans will be cut as well, Citigroup said.

"We do not plan to reduce lending in only those businesses specifically impacted by the incremental regulatory capital requirements," Gerspach wrote.

Lenders recorded profits before the U.S. subprime mortgage market collapsed by selling pooled loans to off-balance-sheet trusts, which repackaged them into mortgage-backed securities. Banks sold those securities to other off-balance-sheet vehicles they sponsored, concealing from investors that the securities were backed by deteriorating home loans.

What's astounding about this, this news/reality, is that absolutely NO ONE really gets it.

THE BANKS ARE BANKRUPT. THEY'RE ADMITTING THAT IF THEY HAVE TO RECOGNIZE THEIR HIDDEN LOSSES....THEY'LL BE UNDERCAPITALIZED, i.e. BROKE!

They are going *urge relief from a higher capital requirement*???

That's just a dissembling way of saying they are levered out their wazoo.

So how levered are the largest banks of our fractional reserve, government-sponsored monopoly?

Well, it's right there in the article. Wells Fargo implicitly says that for every $1 billion loss they ADMIT, they will have to reduce loans by $15 billion.

In other words, these banks are LEVERED a whopping 15 to 1!

By that math, if a mere 7% or so of depositors try to take their cash out....Wells Fargo wouldn't have a nickel left for anyone else.

And note the disgusting politicking. Wells Fargo (management) is threatening legislators with *we'll cut our lending if you push enforcement of this new rule*.

This is complete bull$hit!

They absolutely can raise capital - a hundred billion if they want. They can float stock and/or zing bondholders with a haircut. They just don't want to.

Instead, they are going to continue to CAPITALIZE on the gullibility of Congress, the passivity of Moronic investors, and the pockets of disenfranchised taxpayers.

I want to know who all the rich idiots are who keep dumping their money into the equity-raising efforts of these banks. You gotta KNOW dis ain't no bottom!

Isn't the 15% just the proposed capital requirement -- or am I missing something?

What is the historical ratio of capital to loans? Is 15% drastically higher than that?

Get your hip waders on, you will need it to get thru the latest BS...
Kfell

That means that they only actually have $6-$7 in the vault for each $100 they say they have in deposits.

I don't know what the historical ratio is precisely, but I am sure it's well within single-digits: 3-to-1 or 5-to-1.

Not much on that one. It's a bit of a stretch. Plus we've got bigger villains to go after.

Oh yeah, My mistake.
But the point remains.
Building up capital from (3/1, 5/1) to (6/1) is a big deal for them, right?
I've no sympathy for the banks and their creation of "special purpose investment vehicles" or whatever the accounting phrase du jour.
But asking them to bring these into the "regular" accounting and properly capitalize to boot doesn't sound like something to be done abruptly.
Sounds like another credit contraction in the making -- or is that how we'll soak up all of the Fed's Bernanke bucks?

The Bair story was done terribly by the HP. Apparently the FDIC issued a statement and the dates the reporters had were incorrect and full of inaccuracies.

By the way, i just started a book called The Creature of Jekyll Island about the creation of the Fed. It is a history book that reads like a grisham novel.
Kfell