Look Yonder Whilst I Poke Ye In... 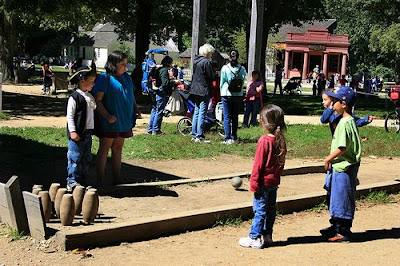 So while Kfell warns me of *not registering* my homeschooled brood...

Purcellville, VA—On Wednesday, January 6 the New Hampshire House of Representatives is scheduled to vote on an amendment to House Bill 368 which, if passed, would make New Hampshire’s homeschool law the most restrictive and burdensome in the nation. "Members of the Democratic leadership are taking advantage of the system and attempting to slip through the most anti-homeschool legislation ever conceived in New Hampshire," said Mike Donnelly, staff attorney for HSLDA.

Despite the fact that a bi-partisan legislative study committee recently voted 14–6 to retain New Hampshire’s existing homeschool law, the Democratic leadership kept the bill alive and placed it among 30 other bills which are all scheduled for separate votes on Wednesday, January 6.

The proposed amendment to H.B. 368 would require that every homeschooled student be tested every year, a portfolio review be conducted for every student every year. Home educated students’ test scores would also have to be sent to the New Hampshire Department of Education each year, and the DOE would be granted sweeping rule making authority.

"This legislation is completely unnecessary. The existing New Hampshire law works well, and in an era when homeschoolers are significantly outperforming their public school counterparts the last thing homeschoolers and taxpayers need is another bureaucracy wasting their time and money," said Donnelly.

While he warns me....his libertarian paradise of NH, after voting for Obama,....they're trying to sneak in a fascist little Nazi regulation on those pernicious little homeschoolers!

Now look, I'm no *party guy*, but everyone who falls into the us-versus-them-ism of party politics has to take a hard look at which one is repeatedly engaging in all sorts of underhanded politicking. They did the same thing in my town recently; they called some midnight meeting, around a holiday I believe, to jam through some *windmill* approval BS. It's always the same people who pull this crap.

And my wife and I got a good laugh at some of the otherwise blue people in town who were sandbagged by the standard operating procedure of dissembling pinkos.
Posted by CaptiousNut at 9:51 AM

You may not be a "party guy" but you had better start paying attention or your beloved children will be living in the state described by Hayek in his "Road to Serfdom"
Where is your activism as Mass. finally, has a chance both to get out from under the Kennedy death grip and, much more important, to SAVE THE NATION by providing the Senatorial vote to defeat the health bill !!!GET BUSY, work to Defeat Coakley !You have about 10 days to rouse the Patriots ! How appropriate for Mass. to be in the position to save freedom again ! MIL

The vote was pushed back. The free staters are rallying against it. You massholes are really screwing us up here.

This is the ONLY reason I am happy to live in Illinois. Home-schoolers are not required to have ANY dealings with the State. Odd, in such a nanny-state, but true. Occasionally some dimwit legislator will wax eloquent re: regulating HSers, but they're batted down pretty quickly and it comes to naught. I think the school powers-that-be JUST don't want to deal with us.

True, but I also think THEY don't want to compare results!

Better to ignore the competition - a luxury they can indulge when they control most of the public dialogue.

So are you gonna vote for Coakley then?