Doesn't Get Much Funnier...

I hate to pull stuff straight from Drudge....but there's a legitimate reason junk ends up there! 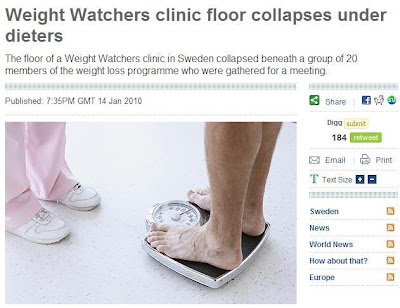 As the dieters queued to see how many pounds they had shed, the floor beneath them in the clinic in Växjö, in south-central Sweden, began to rumble, according to a report in The Local, Sweden's English-language newspaper.

"We suddenly heard a huge thud; we almost thought it was an earthquake and everything flew up in the air.

"The floor collapsed in one corner of the room and along the walls," one Weight Watchers participant told the Smålandsposten newspaper.

Soon, the fault lines spread around the room, and other sections of the floor gave way.

Luckily, all of the dieters escaped uninjured and managed to move the scales to the corridor, which was not damaged in the accident, and were able to complete their weekly weigh in.

The cause of the floor's collapse remains under investigation.


And you just know, that whoever authored that article cracked himself up good with the last line!
Posted by CaptiousNut at 8:39 PM