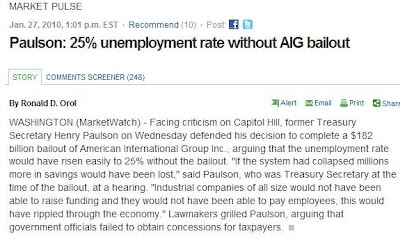 Last year, in the heat of an alleged financial panic, Hank Paulson, a Goldman Sachs alum, asserted that if AIG's counterparties weren't bailed out, i.e. GOLDMAN SACHS, that there'd be 25% unemployment!

At that, incumbent jelly-spined, econo-ignorant Congressmen acceded and handed over $15 billion of our money to Hank's cronies.

You'd think that in a country where millions sneer at, I don't know, say the exagerrated threat of *weapons of mass destruction*....that those same skeptics would deride and berate the $hit out of Hank Paulson's self-serving, rank alarmism.

What he meant was...."25% of Goldman Sachs would be UNEMPLOYED"!

[Actually, the $13 billion or so that Goldman extracted from taxpayers via AIG....that's pocket change that could have been easily raised on the stock market - don't let anyone tell you different. If they drop the offering price low enough, they'll get the capital they need - they just didn't want dilute their stakes away!]

It's hard to imagine that the public hasn't caught onto Big Government's endless stream of scare tactics: global warming, WMDs, Amnesty for illegals or our economy falls apart, swine flu, falling behind China in math and science, *25% unemployment*, etc.

More On The Secret Goldman Sachs Bailout
Posted by CaptiousNut at 10:07 PM

That's a great line: 25% of GS would be unemployed!

Why doesn't the public catch on? Maybe they are as dumb as GS + Team Obama think they are. Depressing.

The political parties haven't made an issue out of Goldman because...

BECAUSE neither party feels like it's a demerit they can easily pin on the other!

Goldman may represent Wall Street, but it's run by people who vote for the bigger socialists. AND, they donate almost equally to each party. Hence the popular aspersion *Government Sachs*.