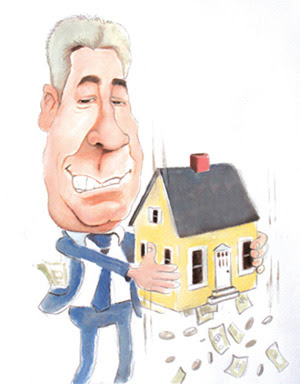 I may have mentioned this before, but will do so again.

Once a property is foreclosed upon, any tenants within it do retain some rental rights.

For example, in Massachusetts, the law stipulates that post-auction, the tenants would have 60 days until forced to vacate.

But there's been some recently passed, superseding Federal law.

Supposedly, up to 12 months of a lease must be honored by the new owner(landlord), except in the case that they intend to move into the place themselves. In that case I believe the tenant only gets to stay for 90 days or so.

So in the ongoing battle with my Moronic, soon-to-be-foreclosed-upon landlord, I've had the idea to, near *the end*, try to wrest a lengthy (18 month) new lease from him; one that would be, of course, on quite favorable price terms. But that's really but one of many subplots unfolding here at the moment, and therefore only a mere notion in the back of my head.

Recall that last January I had the pleasure of a full month in Naples, Florida. I rented a condo down there, at the last minute (Dec 29th?), from a displaced New Yorker. He had levered himself up to owning perhaps a dozen or more rental properties across Florida - unfortunately for him (and the banks!) most were bought at the bubble prices of yesteryear.

There was no way he was going to still have that condo I rented from him in 2010 - so I figured. I wanted to email him recently to ask but thought it an *impertinent* question.

But guess what, he emailed me yesterday, telling me his condo was available for the next two weeks due to a cancellation or something. Because, as y'all know, that's what I do, I rent soon-to-be-foreclosed properties!

I told him that unfortunately Florida wasn't in the cards this winter. He wrote back:

If it does, April in Naples is Wide Open and likely a welcome break from NY [actually Boston, but whatever]. Remember, under new Federal Regulation, banks must honor leases previously in place after a foreclosure through the term.

There are some exception IF a new owner wants to occupy, but that likelihood is small. So if you want to rent the Vanderbilt beach place for, Oh....say somewhere near FMV of $600 /mo for round numbers,

that’s got to be enticing.


Did y'all catch that?

His condo is, implicitly, in the process of repossession, and he's offering me a multi-month lease on it for a pittance.

I don't want to call this fraud because, well, technically it's not. It's all within the *law*.

But these are the type of shenanigans that will be pervasive for quite some time. I mean here's a guy who will end up *walking away* from a dozen properties. And he's probably going to do what every other bankrupt landlord is doing - milk as much rent as possible while the banks bury their heads and stall repossession, and on the way out, he's going to hit them again with nettlesome tenants.

In these scenarios, banks will lose a bit because, the possibility of a straggling AND destructive tenant, will certainly depress prices a bit at auction.

So, for a prospective tenant thinking about one of these purported *FMV* deals, is it wrong to essentially steal a bit of money from corporately owned, government-sanctioned AND SUBSIDIZED banks?

It most certainly is.

On the other hand, those banks (and Big Government!) steal from us on a daily basis.

So couldn't such borderline ethical behavior be seen as merely a *clawback* of one's own private property?

For some background, see - Naples Getaway.
Posted by CaptiousNut at 12:17 PM

I would have np doing this as a tenant. Plus, I like the word "nettlesome".