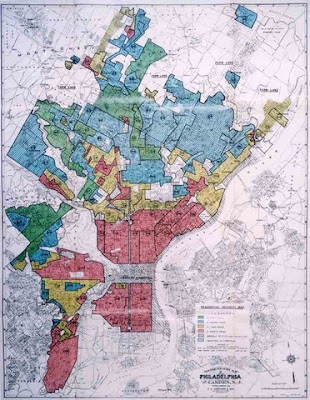 Redlining refers to, well, taking a map, and color-coding it to denote areas of *chronic loan delinquency*.

That's an old map of Philadelphia above; an image that's well-known and oft-invoked among the institutionalized race-hustling community.

You can read more about it on Wikipedia - though I warn you, that entry has obviously been written by the aforementioned hustlers!

The practice of red-lining actually has its historical roots in the Federal Government!

Private organizations created maps designed to meet the requirements of the Federal Housing Administration's underwriting manual. The lenders had to consider FHA standards if they wanted to receive FHA insurance for their loans. FHA appraisal manuals instructed banks to steer clear of areas with "inharmonious racial groups"...

And here's where the Big Government apologists start spinning:

Urban planning historians theorize that the maps were used by private and public entities for years afterwards to deny loans to people in black communities.[8] However, recent research has indicated that the HOLC [read "the Feds"] did not redline in its own lending activities, and that the racist language reflected the bias of the private sector and experts hired to conduct the appraisals.

Hah! All racist redlining was a consequence of the PRIVATE SECTOR (even though the Fed codified it)!

Redlining has helped preserve segregated living patterns for blacks and whites in the United States, because discrimination motivated by prejudice is often contingent on the racial composition of neighborhoods where the loan is sought and the race of the applicant.

That gibberish sounds like something out of a Harvard freshman *sensitivity seminar*, or something.

Many believe policies of credit card companies such as American Express that reduce credit lines of individuals that make purchases at retailers frequented by so-called "high-risk" customers to be akin to redlining.

Deny credit based on research of where and what one shops for?

That was probably VERY CLEVER at its inception - though it sounds like Amex was finally busted, er shaken down by class action attorneys.

Policies related to redlining and urban decay can also act as a form of environmental racism, which in turn have an impact on public health. Urban minority communities may face environmental racism in the form of parks that are smaller, less accessible and of poorer quality than those in more affluent or white areas in some cities. This may have an indirect impact on health, since young people have fewer places to play and adults have fewer opportunities for exercise. 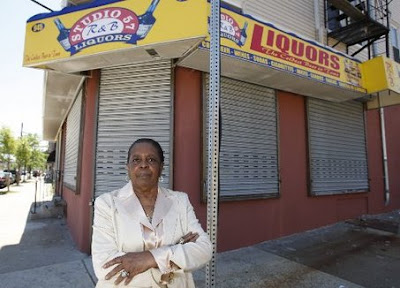 The term "liquorlining" is sometimes used to describe the practice of encouraging very high density of liquor stores and other alcohol outlets in low income and/or minority communities relative to surrounding areas, implicitly by design. This is believed by some to cause a neighborhood to go downhill in terms of crime and quality of life. However, unlike redlining, this is usually not illegal. 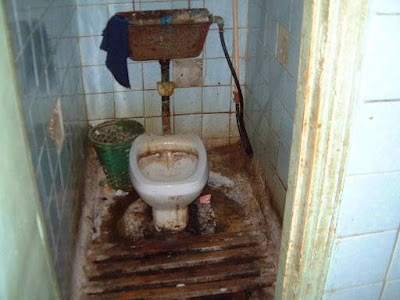 Nope. Though something just as humorously predictable:

Although open redlining was made illegal in the 70s through community reinvestment legislation, the practice continued in less overt ways....and many allege that the redlining target group has shifted from African Americans to the LGBT community.

I definitely got side-tracked writing this post. I just wanted to say one small thing about so-called red-lining but was distracted by the inanity of that Wikipedia link.

I was thinking about these hoods where lenders are forced to burn money and how Big Government's failures are routinely used as arguments for yet more Big Government.

I submit that the very existence of *public housing* just about ensures that the surrounding *red* areas won't ever gentrify. The projects essentially institutionalize neighborhoods as slums - and therefore anyone who doesn't sell their product there becomes a de facto target for the *shakedown industry*.

The Lack of Good Sushi in the Slums is "Discriminatory"

And visit Zombietime for a mind-blowing look at the role of subprime shakedown artists in today's financial cluster-[bleep]. That post I linked in one of my smackdowns of Barry Ritholtz.
Posted by CaptiousNut at 1:03 PM