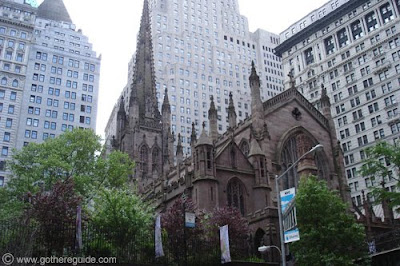 It used to be that towns and villages would never dare building a structure higher than the church's spire. It'd be deemed blasphemous.

But today, we have skyscrapers, monuments to and icons of the prevailing religion du jour - that of selfishness and monetary wealth. Obviously, they tower over traditional houses of worship, and do so with impunity.

Recently we've had to make way for ascendant new creeds like modern day earth worship. Heck it was 2.5 years ago now that I taught my son about those eco-pagan idols that are euphemized as *windmills* and *clean energy*. 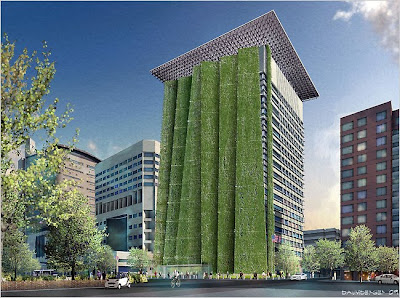 As part of a $133 million renovation, the General Services Administration is planning to cultivate "vegetated fins" that will grow more than 200 feet high on the western facade of the main federal building here, a vertical garden that changes with the seasons and nurtures plants that yield energy savings.

"They will bloom in the spring and summer when you want the shade, and then they will go away in the winter when you want to let the light in," said Bob Peck, commissioner of public buildings for the G.S.A. "Don’t ask me how you get them irrigated."

The G.S.A. says the building will use 60 percent to 65 percent less energy than comparable buildings and estimates a savings of $280,000 annually in energy costs. Solar panels could provide up to 15 percent of the building’s power needs. The use of rainwater and low-flow plumbing fixtures will reduce potable water consumption by 68 percent. And energy for lighting will be halved.

"It will be one of the more energy-efficient high-rises in America, possibly in the world," said James Cutler, whose architecture firm, Cutler Anderson, led the design work.

A green skyscraper? Bam! That's real clever, delivering both idolatries in a bundle!

Thanks to Taylor for alerting me to this one. Nothing in the Times ever escapes his attention. I believe he's actually a paying NYT subscriber!
Posted by CaptiousNut at 8:12 PM

Once upon a time, the church controlled everything, including building permits. So of course they asserted primacy for their "house of god".

Thank humanity those days are over.