The Peril Of Wage Slavery 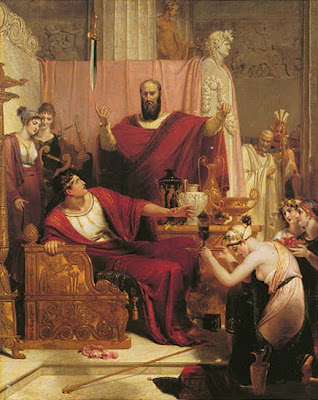 That sword above Damocles' head is hanging by a mere thread, a single strand of human hair I believe. He's not the king, just some joker who wanted to know what it was like to sit on the throne.

It's like....always being on the brink of death, at least that's the lesson King Dionysius wanted to teach him by secretly suspending the weapon.

According to Wikipedia, the Damoclean sword is:

...used in allusion to this tale, epitomizing the imminent and ever-present peril faced by those in positions of power. More generally, it is used to denote the sense of foreboding engendered by a precarious situation, especially one in which the onset of tragedy is restrained only by a delicate trigger or chance.

Yeah, driving down the highway, every passing car does indeed threaten our very existence...

But when I think of precariousness today, I right away think of *wage slaves* and *mortgages*.

The fact is, I know very few people who are self-employed, thriving, and not leveraged on the homefront.

Once they or their spouse loses a job in this receding, depressing economy they are in instant, deep financial trouble. 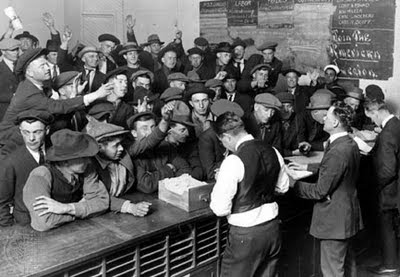 Yet another person I know just recently lost their job out of the blue. They are middle-aged and have several kids. When I informed my wife about it....we spoke in a manner as if someone had died.

I know it's not a genuine tragedy, but I'm also well aware, even if they aren't, of what how relatively hard the road ahead could well be.

Plus, seemingly nobody learns.

I already mentioned that one family who, after miraculously getting out from an upside-down house purchase....they parlayed the good fortune into an even more expensive, more leveraged purchase.

And then there's this guy I know. He's been out of work for almost a year. And like *everyone*, he had to borrow against his 401k just to pay the bills. Well supposedly he just got another job. But guess what, he told me that a month into it, he was going to apply for a large home equity loan to make some improvements.

I feel like grabbing him by the ears and screaming some sense at him!
Posted by CaptiousNut at 8:34 PM

Ha! Reminds me of a point I was making to a friend the other day. We were discussing strategies for communicating libertarian ideas to leftists and he said, "Okay, say someone says, 'What if a guy is starving on the street, it's not okay to use taxes to feed him?'"

I said, "Say, 'Why is he starving?' It's never okay to use taxes for anything but certainly a case can be made for charity in the case of a man who is starving due to misfortune. If he's starving because he's a no-good, dead-beat, child-and-wife-abuser alcoholic who can't keep a job and his family won't take care of him as a result... let him die in the gutter. And anyone like him."

No one has an obligation, by guilt or by State, to support an anti-social miscreant like that.

"Bailouts for Wall Street? Bailouts for Main Street!" But how many of the fools underwater on Main Street put themselves in that position when they didn't have to?

How would Wall Street have gotten so rich if they weren't selling things to people who had no business buying them in the first place?

Wage slave = someone that simply cannot think rationally about their own spending. They get a raise and increase their spending so as to continue being in the red. And that's most people.

People just need to get a life and realize it's not all about working and buying things.