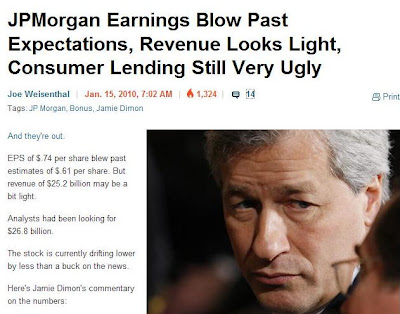 Who in their right mind could possibly believe that?

Who could believe that ANY bank with home loans, car loans, commercial loans, credit card, commercial RE, etc. on their books was *making money*, no less such an enormous sum?

I don't care if JPM has supposedly set aside $33 billion in total loan loss provisions....if they had to sell everything, OR mark-to-market all of their *assets*, they'd be completely insolvent.

So what's the stock price going to do?

Who knows? I'm betting lower and I feel outright compelled to do so.

Minimally, expect them to dilute equity holders within this year, yet again.

That deadbeat landlord of mine has a JP Morgan notch in his belt.

One of his four soon-to-be-foreclosed properties has a $1.1 million lien on it that's now, courtesy of WaMu, on the books of JPM. See - Why WaMu Is Bankrupt.

But real estate has been strong here in Boston.

It's current market value, only two years from the loan origination, is probably around $550,000.

And JP Morgan, through a reduced auction price, is also going to be on the hook for the unpaid property taxes, any septic issues, and whatever damage the crumb does on his eventual way out.

How many of those type of *assets* is Dimon papering over when he glibly reports *...nearly $12 billion* in earnings for 2009?

One thing that's taken me aback this past week, is the deafening silence among analysts and bloggers about JPM's so-called earnings. Either I'm dead wrong, the bears have been extinguished,....or everyone has become content to play *pretend*. 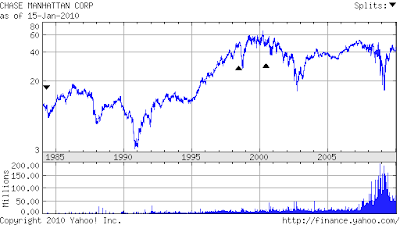 Place your bets!
Posted by CaptiousNut at 4:20 PM