Everyone's A Sucker For False Hope 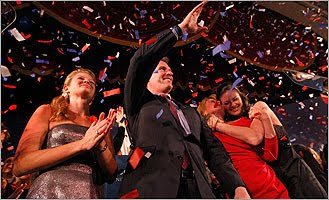 So I guess I was wrong in predicting that Scott Brown *hadn't a chance* of winning the open Senate seat in Massachusetts.

Why was I wrong and how exactly did he win?

Well, those are unprovable questions.

But I'll offer my submissions.

One thing that out-of-staters don't understand about Massachusetts, is why exactly it's a blue state. The population is pretty lily white; everyone works; and most are pretty honest (here I never worry about getting ripped off by the mechanic!).

In this vein, any Masshole who's ever lived elsewhere, particularly outside of the NE corridor, has surely been interrogated as to *who the eff* votes for Ted Kennedy back in their homestate. People here have no idea, or at least a greatly diminished one, of how much the man was loathed nationally. Blame that on a fawning, uncritical press; and the Morons who voted for him out of habit rather than admit they made a mistake. And that last line is key. Here's a quote I've cited often:

Ignorance maketh most men go into a party, and shame keepeth them from getting out of it. - Lord Halifax

Take, for example, my father. He pulled the lever for Martha Coakley - as he (and almost my entire family) always does for that particular organized political party. I'm sure the over-riding issue for him was not healthcare, Wall Street, immigration, or any other such triviality.

No, for him, like millions of others and as the quote suggests, it boils down to a single issue - if he votes differently (i.e. for the other organized political party) than he has for the past four decades....that would irritably imply that he might have been *wrong* all these years. The reality of Obamacare healthcare deform remains abstract, and something he could mentally work around. BUT, an internal ego is tougher to manage.

Now what type of person would be petrified to admit error?

Those would be the people whose credentials are certified from without - from *degrees* and those sanctified institutions of *higher learning*.

One thing that I routinely laugh at are these Morons who fanatically believe that *their vote counts*. These are the people who are either very LOUD or very secretive about whom they vote for. I mock them all for their arrogance, for their delusional self-importance.

My wife was pleased that Scott Brown won yesterday and I did my best to mock her for it as well.

Who exactly won? Power simply shifted every so slightly from one organized political party to another. Real change remains voiceless.

She was watching Scott Brown's pathetic victory speech. One where he nauseatingly praised the burning-in-hell Ted Kennedy, more than a couple times to boot.

Not only that, he supposedly did not use the word *Republican* once in his ham-handedly delivered, PREPARED speech. (Normally, I'd applaud this type of non-partisanship.)

And at one point, he made a thoroughly awkward joke about his daughters both being *available*.

All I could do is shake my head at this mimbo and his cheerleaders - and put my Bose noise cancelling headphones on.

There's a conventional wisdom out there, particularly in the stock market, that *gridlock is good*; that way neither party can do much damage.

But I submit that today *gridlock is bad*. Neither party has distinguished itself on the most paramount and pressing issue of the day - the question of HOW BIG government should be.

So getting back to the Brown victory...

I really don't know. The vote, as unpalatable a candidate that Coakley was, it was surely a referendum on Obama to an extent...

And this, I believe, is one latently racist (and sexist!) state!

So whom did the smartest, *most-educated* people in Mass (in the country?) vote for? 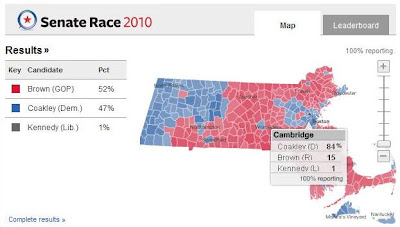 Hah! 5 out of 6 people in Cambridge, home of Harvard, MIT, and scores of graduates and Phds, voted for that shrill Coakley - a woman who probably couldn't pass a single course at those very institutions which certified their intelligence.

I may have botched the Brown prediction...

Can you clarify this:
QUOTE
But I submit that today *gridlock is bad*. Neither party has distinguished itself on the most paramount and pressing issue of the day - the question of HOW BIG government should be.
ENDQUOTE

Seems to me if neither knows what it is doing then gridlock is a good idea ...

"I may have botched the Brown prediction."
You have lots of company.
Unlike you, though, I am pleased that he won. He'll be at least a minor obstacle to some of the larger stupidity coming out of Wash. DC.

With gridlock, inertia holds....government grows bigger unchecked. Let gov't get huge and destroy itself, e.g. with Obamacare OR have some budget ax-wielders come to power.

I'm not displeased that he won.

I'm more *unmoved*, relative to everyone else.

The Republicans MO has long been, just to be an alternative, just to be a little *less bad*. An apparent victory such as this will do nothing but prevent them from a wholesale mending of their ways.

Too bad,Scott Brown made those gratuitous remarks about Kennedy..Spoiled the evening 's otherwise festive air.
Reminded me of Dan Rooney, after accepting the SuperBowl cup,similarly spoiled the moment by saying "I want to thank President Obama " ...UGG
Hey, its OK ...we'll do without your vote.
btw, don't ever run for anything
anon MIL

I'm happy Scott Brown won. My biggest peeve are people who don't vote because they think they're so smart that they're above it all.

So I guess you're not including yourself in the map of who the most educated/smarted MA residents vote for? or would you say that the SMARTEST didn't vote?

That...is an ignorant position if you ask me.