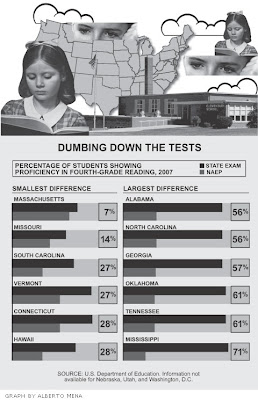 What percentage of Georgia’s fourth-graders are good readers? It seems to depend on whom you ask. The state will tell you that 85 percent of them met or exceeded the proficiency benchmark on its 2007 test. Not too shabby. On the other hand, only 28 percent of fourth-graders in Georgia scored high enough to be considered proficient on the National Assessment of Educational Progress (NAEP), an exam administered by the U.S. Department of Education that is usually regarded as the gold standard in education testing. The big difference results from where the two tests set their proficiency bars. Georgia sets its bar pretty low—so low that barely literate students can score high enough to be deemed proficient. The NAEP has a much higher standard; in fact, a student labeled "proficient" by Georgia could fail to score above "basic" on the federal test.

A recent federal study noted that 15 states lowered at least one of their proficiency standards in math and reading between 2005 and 2007.

But the law [No Child Left Behind] has a gaping loophole: states get to define proficiency however they want. A state can thus meet NCLB targets by defining proficiency down; toughening its standards, by contrast, handicaps its ability to meet the federal requirements. 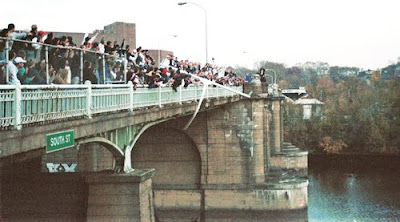 What do ya know!?

I found a pic of my fellow UPenn alumni tossing the goal-posts into the Schuylkill river!

If I recall, University officials once tried to put *Vaseline* all over the posts in an effort to stop the students from tearing down them down (kids climbed up them to topple them at first) - and costing the school thousands of dollars for repair/replacement.

But this was to no avail. There were, obviously, many students (e.g. English majors and urban planners) at Penn who knew how to operate with such a substance.
Posted by CaptiousNut at 5:50 PM