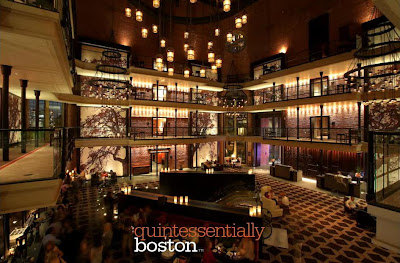 Today has been *recuperation day*.

Last night I went into Boston to meet up with a Philly buddy I haven't seen in a couple years. I let him pick the place because, well I'm not really aware of any decent places in the entire city!

He was staying at the Liberty Hotel, so I agreed to meet him in the lobby there. Stuck on a *call*, he left me idling there for a good twenty minutes where I stewed about being amongst suck complete jacka$$es. I can't stand hotels because they are teeming with geeked-up poseurs; people who are usually there only at the expense of a third party - be it a corporation, one's *investors*, a government(!), or some other wasteful entity. In fact, the older I get, the more I'm irked, like Curly, by *city slickers*. Let's pause this rant for a look back at that classic flick:

Heck, everyone in this hotel lobby is staring at their iPhone, sipping on outrageously priced alcohol.

I really, REALLY did not want to spend another minute in this hellhole but...

So my buddy comes down. We are both absolutely famished and since time is of the essence (I was going to take a 10pm train home), I let him convince me to eat there, at what was definitely going to be some jam-the-corporate-expense-accounts, inflated restaurant.

Buddy - I ate there last night, by myself, and it was 80 bucks...But it's good, maybe the best food in Boston.

So we ate at Scampo and my buddy was correct, and prescient. The food was darn good; and not too,too bad on the wallet either. Two entrees, two appetizers, one dessert, and four drinks including the tip did turn out to be precisely $80 apiece. Everything, except for my orecchiette was indeed delicious.

You see, not only have I lived in culinary capitals like NYC and Philly, my wife and I can also cook. We are real *food snobs*. We don't mind so much paying-up once in a while for an occasion, but it darn well has to taste good!

My buddy too has been around a few cities and his wife is a freakin' caterer....so I generally respect his opinion in this area. Although, there was that one time he convinced me to trek up to Dalessandro's, which he and his future wife acclaimed as *the best*, and suffered through an Alpo-tasting cheesesteak!

Because we all know how it goes - usually if someone recommends to you a restaurant, a book, or a movie and it flat-out SUCKS....

You'll never take their advice on that matter again!

After dinner we slid across the lower lobby to one of the hotel bars. It was okay in terms of atmosphere and people, but after a few more beers (Miller High Life!) it was decided to go upstairs to the main bar (pictured atop) which was really hopping. It was well-attended; there was a DJ blasting dance music; and there was some sort of *fashion show* as well. Models were ascending the escalator, being escorted by security dweebs onto platforms, and getting barraged by a handful of professional-looking photographers. Personally, I didn't think there was any film in the cameras - the flashing was all for show. I even went up to one of them with that very accusation. She laughed and said I was right. No film, just a *card*.

It's always an ordeal to get a drink at crowded events and last night was no exception. Finally we got hold of some gorgeous waitress who informed me that the only light beer they had was *Amstel Light*.

Now what the bleep is it with Amstel Light? It seems like whenever a bar carries it, it's carried to the exclusion of most others like Budweiser, Coors products, etc. Obviously there's some *discounted bundling* going on here.

But I simply will not drink that pi$$. I looked at my buddy and we resigned ourselves to ordering Kettle One gimlets. I knew that I would be positively wrecked pouring vodka on top of five beers but that was pain I was willing to suffer instead of drinking that urine re-labeled as Amstel Light.

Gimlets can also be risky as rookie bartenders the world over often ruin them with too much Rose's lime juice. I actually had to stop ordering them years ago on account of this common mistake; instead I would order vodka on the rocks with *three limes*.

But the drinks were fine - however many of them we ended up having before stumbling upstairs to crash in my buddy's hotel room.

Now guess how much those drinks cost...

Those prices are even beyond Manhattan prices, I believe. Yeah, $15 for a martini may be passable, because it takes a minute to mix, and because it might qualify as 1.5 drinks if they include the shaker....but $15 for a simple vodka drink? My wife is 100% right. She says going to these places is *like literally burning money*.

At one point deep into the evening, my buddy asked for a water. The beautiful (chick) bartender plops some large bottle down in front of him and says, "eight dollars."

I just had another back-to-the-80s flashback. Remember when Det. Axel Foley ordered a Coke at a strip club in Beverly Hills Cop 2? When the bartender said it cost $7, he spit out his drink and exclaimed, "Seven dollars? I could get bl0wn for seven dollars!!!*

As I alluded to above, I never made that train and crashed on a chair in my buddy's hotel room. I awoke at 6:51am only to see that I missed the first one out as well. Now I had to wait another painful 2.5 hours until the next one. My head, thanks to Amstel, was really throbbing until this afternoon.

So I'd highly recommend the restaurant, but skip the bar - it's for bull-market *children*. I don't care who is paying or how much money one has, there's something truly obscene about $15 drinks and $8 bottles of water. 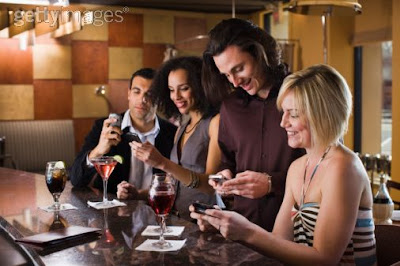 Side Notes - All of these swanky, hopping places are full of uninhibited pick-up-artists. I heard one broad next to me at the bar propositioned by a male. His line was "Is that a hickey there on your neck?", pointing to a large mark on her skin. It wasn't, she informed him, "...it's been there since I was born!"

Also, I know that as a new parent suburbanite who spends all his time on homefront, I know that I'm a little *out* these days.

But still, the cell phones are out of control. Seemingly all young people do is stare at their iPhone, Blackberry, Droid, or whatever. I can't tell you how many times I saw two chicks sitting together, BOTH staring at their email or text messages instead of conversing with each other or anyone else. What the bleep is the point of going out somewhere if your head isn't coming for the ride? At one point, late at night to boot, I noted a group of six people sitting down at the bar - FOUR of six were staring at personal communication devices! It's all I can do to stop myself from walking up to these thumb-typing Morons and call them losers to their faces.
Posted by CaptiousNut at 9:13 PM

well I'm not really aware of any decent places in the entire city!

Are you serious? If the food everywhere else in the world is truly so much better, why haven't any ambitious entrepreneurs brought it here?

PS: You can leave that nasty cheese steak garbage in Philly.